All That Sports said Bae will play at the Shinhan Donghae Open on the Korean Tour starting on Sept. 14 at Bear’s Best Cheongna Golf Club in Incheon, just west of Seoul. 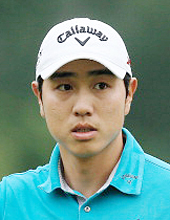 Bae, 31, will complete his mandatory military service on Aug. 16.

Bae began his military duty in November 2015 amid much controversy. Earlier that year, Bae lost a legal battle against the local military manpower agency over the extension of his overseas travel permit. Bae sought to extend his visa, which had expired at the end of 2014, so that he could continue playing in the United States.

Bae made his PGA tour debut in the 2012 season through the 2011 PGA Tour qualifying school by finishing tied for 11th. He had a total of two PGA tour victories, at the BP Byron Nelson Championship in 2013 and Frys.com Open in 2014. He is one of five Korean men to win on the PGA Tour.

The PGA Tour has allowed Bae to retain his membership during his military service. He’s scheduled to rejoin the tour in October at the start of the 2017-2018 season.