President in a hurry

President in a hurry 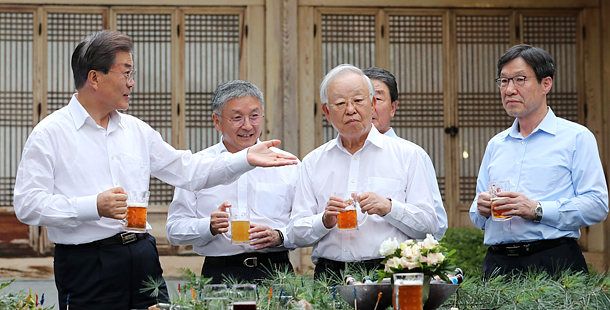 What’s the hurry? Who’s in control? These are the questions businessmen are asking as they can hardly believe the economic policies of the new government. They don’t appear to be the work of careful career budget bureaucrat Kim Dong-yeon, deputy prime minister for the economy. Even those who cheered the birth of a government under liberal President Moon Jae-in and his left-leaning economic vision are complaining of haste.

The so-called J-nomics — the “J” stands for Jae — bear inarguably noble intentions regardless of questions about economic feasibility in the concept of promoting growth through increases in income and jobs. It tries to address fundamental problems of a slow-moving economy, widening discrepancies in wealth and joblessness among young people. The campaign stems from aspirations for a new growth engine beyond an outdated model reliant on large enterprises and exports.

We are entering an uncharted path. We cannot know what kind of dangers await us. The crew should be extra alert and vigilant so as not to lose direction. But the captain is shouting full speed ahead. The government has dizzily pushed ahead with one controversial agenda after another — hikes in the minimum wage, putting contract-based workers on permanent payrolls, a spike in tax rates for the richest individuals and companies, and a nuclear power phase-out.

One businessman running a small enterprise likened it to a hospital experience. “I’ve had skin trouble. Before prescribing medication, the doctor recommended I take a liver function test. The medicine has an immediate effect, but can be tough on the liver. As my liver condition was not that good at the time, the doctor prescribed less strong ointment. If I had taken a strong medication, the skin trouble would have been cured faster but it could have ruined my liver. The government is doing exactly that, prescribing a strong drug without taking into account the consequences and side effects.”

Moon’s government should have had employers, labor, and government representatives talk about policy plans to iron out differences, even if such a process takes time. Most welfare-minded governments like Sweden and the Netherlands pursue new policies that way. A more progressive restructuring plan could have resulted if both employers and unions willingly made concessions. Resistance and side effects are inevitable because the government is dumping change on the companies alone.

Conglomerate leaders kept up a brave face and beamed along with President Moon Jae-in, who hosted a beer garden party for them. Chaebol chiefs go through this ritual every five years when a new president takes office. The 5-percentagehike in corporate tax rate won’t hurt them greatly. They only have to be more mindful of fair trade. What concerns them more than domestic policy is the overseas business environment.

A toll, however, could fall on the small and mid-sized business community. J-nomics so far does not improve their business environment by removing red tape or upgrading the financial sector. It merely offers to act like a big brother to prevent bullying by large enterprises.

Such lopsided policy comes from an administration led by progressive scholars and civic group activists who see the economy in the light of capitalists pitted against workers and the rich versus the poor. The minimum wage hike, a nuclear phase-out, and the real estate and welfare policies are the brainchild of Kim Soo-hyun, an urban planning professor who was recruited as the president’s senior secretary on social affairs. Moon is said to be most reliant on Kim for policymaking.

Some believe that Byeon Yang-kyoon, who was top economic adviser to former President Roh Moo-hyun — Moon was his chief of staff — is the shadow architect behind Moon’s economic policy. But Byeon champions the creative destruction theory of Joseph Schumpeter, which is hard to find in the policies pursued by the incumbent administration. Haste does not make reforms. Byeon could be one expert on the liberal team who may not be happy about the economic policy of the new administration.

*The author is the head of Economic Research Institute of the JoongAng Ilbo.