Stress relief becomes a big business : People are turning to rage rooms and fidget spinners to chill out

Stress relief becomes a big business : People are turning to rage rooms and fidget spinners to chill out 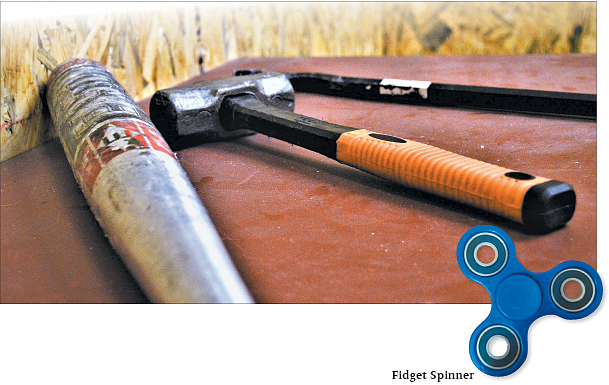 It is said that one of the most frequently used foreign words in Korea is the word “stress.” Regardless of age or gender, it is undeniable that stress is an inescapable part of our daily lives. But what exactly is stress?

According to The American Institute of Stress, stress is “not a useful term for scientists because it is such highly subjective phenomenon that it defies definition.” Even the description of stress is stress-inducing.

Recently, a wave of incidents have raised red flags about the increasing tide of rage in Korea. From a young graduate student who held a grudge against his professor and made a homemade bomb, to a man who stabbed an internet repair serviceman, stress defies demographics. All of these events took place over the course of a month, and it is hard to just consider these incidents as merely personal issues.

From left: Stress is inevitable in our lives, and therefore the method to combat it is a vital part. Middle: A lot of Koreans, especially youngsters in their teenage years and 20s, tend to rely on spicy food, such as tteokbokki, to get rid of stress. Right, coloring books and drawing books are also a popular alternative to a lot of adults. [ILLUSTRATE BY KIM HOE-RYONG, JOONGANG ILBO]

Handling stress varies from person to person, but the most common ways are listening to relaxing music, eating spicy foods, taking a relaxing bath, or working out at the gym.

A senior at Hankuk University of Foreign Studies, surnamed Jo, said that whenever she is slightly stressed, especially during final exam season, she orders tteokbokki (spicy stir-fried rice cakes) around midnight. “Whenever I am stressed, tteokbokki is the first thing that comes to mind. The moment I have a bite, I regret having eaten it, but as I keep on eating it, I kind of feel like it is getting rid of the stress.”

Another method to handle stress, which has gained popularity since 2013, is coloring or drawing books, which have themes ranging from maps of different cities around the world to exotic flower prints. The coloring book fad has been going around for years, and according to Yes24, an online bookseller, the most well-known coloring book “Secret Garden” by Johanna Basford has been published in 13 nations, and it was named Book of the Year in 2014 by Yes24.

For those with a smaller budget to spend on getting rid of stress, listening to relaxing sounds on YouTube is also an option. When one types phrases like “relaxing sounds” into the search bar on the site, hundreds of videos pop up featuring the sounds of nature such as waves, rain and waterfalls.

Another item that has gained attention around the world is the fidget spinner. Popular celebrities posted photos and videos of themselves holding the plastic toy in their hands on Instagram, quickly creating a demand for the toy throughout Korea.

They quickly turned up at street vendors in Seoul and the online market Auction said on July 20 that the fidget spinner was the retailer’s biggest hit in the first half of the year.

Although it doesn’t seem like much, this simple act is said to relieve stress and boost concentration levels, although there is no scientific evidence to support the claims.

Dunkin’ Donuts even collaborated with the “Spider-Man” film franchise to create branded fidget spinners that are available as gifts when customers spend more than a certain amount of money.

There is also an item called the Fidgetcube, a small handheld device which has sensory tools on the sides, which promotes itself as a device to take care of stress and anxiety.

“Sleeponomics” is considered to be a rising industry these days to satisfy the needs of those who lack sleep. With a head full of worries, even falling asleep at night can be stressful. There is nothing more anxiety-inducing than not being able to fall asleep when one wants to, and these days more and more people are looking for quick methods to doze off.

ASMR, which refers to Autonomous Sensory Meridian Response, provides sounds that cause relaxation, has become a popular way to relax for some.

These sounds are recorded with special microphones that capture even the smallest noises. There are popular YouTubers who record ASMR, and they create videos that often last for a couple of hours, so listeners can mindlessly fall asleep while listening to the video. 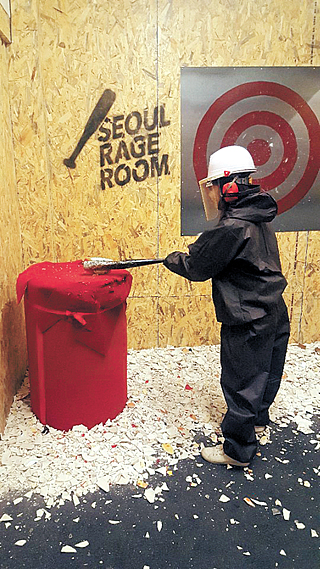 In the Seoul Rage Room, which opened up in April near Hongik University, visitors can hit or smash objects inside the room by paying the entrance fee which range from 20,000 won (17 dollar) to 180,000 won. [JEON SO-HYUN]

Located near Hongik University in western Seoul, there is a room where visitors can smash or throw objects against the walls of a room as a means to relieve their stress. The Seoul Rage Room opened up in April and visitors can pay a price ranging from 20,000 won ($17) to 180,000 won, depending on how stressed they are.

The cheapest option is the 20,000-won “Vandalism” package. The range of options goes on to include “Destruction,” “Demolition,” “Annihilation,” and finally, the highest priced one, the 180,000 won package, where visitors are supplied limitless ceramics and an electronic device, called “Madness.”

Upon entering the room, visitors can choose a tool with which they can smash the objects, such as a golf club, a hammer or a baseball bat. The visitor also has to sign an agreement which says that the business is not responsible for damage to the visitor. Therefore, visitors are recommended to wear a helmet and a safety suit which is provided.

A 24-year-old woman who purchased the 20,000 won package - ten ceramics and a baseball bat - said, “I had high hopes for this room, but it didn’t really fulfill my expectations. I think I got more stressed from having to break these objects in the 15-minute time limit.”

“I actually felt like breaking the dishes was getting rid of some of the stress and 15 minutes felt like a long time,” said another 23-year-old female visitor. “However, one thing that kind of bothered me was the fact that the room was a bit too hot.”

Another activity room which is gaining popularity are VR rooms where visitors can enjoy various sports indoors such as baseball via virtual reality. At one such business, StrikeZon, visitors can enjoy the thrill of swinging the bat to get rid of stress and anger.

Side effects of instant reliefs

With the popularity of violent and aggressive ways to relieve stress, the instant gratification of these violent activities is causing concern. Professor Kwak Keum-joo from the Department of Psychology from Seoul National University is skeptical about the popularity of these rooms. She told the Korea JoongAng Daily that the reason why a lot of younger people are visiting these rooms is because they are looking for instant relief.

Relieving stress in violent ways can temporarily eliminate anxiety, but that violence can eventually be normalized. She emphasized that though it might look like stress is taken care of in that moment, but violence can be reenacted in the future.

When asked what could be the most ideal way to get rid of stress, she said, “Stress has to be definitely taken care of. If stress is constantly held in, it can explode one day, and can even lead to crime. Therefore, stress has to be relieved from time to time, but through healthy ways. For instance, when someone is mad, taking that anger out on someone can get rid of stress, but that kind of behavior can become a habit, and can even reach in the level that can’t be controlled.”

She explained that the ideal ways to relieve stress would be to get a hobby, try out sports, or to just escape that situation for a while and think about what is making one mad for a few seconds.

Culture critic Ha Jae-keun also agreed that taking the anger out in aggressive ways is not ideal. “Relieving stress that way will only be a one-time thing.”