Companies vie for a space in parking lot industry

Companies vie for a space in parking lot industry

With the number of registered vehicles still on the rise in Korea and smarter technology solutions available, investors and venture capitalists are increasingly focusing on the parking lot industry.

“Parking lots were just thought of as part of a building in the past, but the image is changing since many of them are now operated by franchises and companies with brand names,” said Lee Seung-ho, an executive at Hana Financial Investment. “This is leading to a growing interest in the business among wealthy people.”

One of the biggest reasons that many analysts believe the parking lot business has high growth potential is due to the lack of supply in Korea.

According to the Korea Transport Institute, there were 20.1 million registered vehicles in the country and 20.3 million available parking spaces in 2014. This suggests that there should be enough spaces to park all cars registered in the country.

However, parking spaces located in apartment complexes account for 50 percent of the total and there aren’t that many places to park that are not in buildings where people live or work. Available parking spaces also vary by region. There are enough places to park in places like Seoul and Ulsan, but the figure remains low in areas like Incheon, Daegu and Gwangju.

Lee at Hana Financial Investment said the parking lot business is expected to continue to grow as many companies are likely to adopt an unmanned system following the hike in the minimum wage. Owners of parking are concerned about the financial burden that the 16.4 percent increase in the minimum wage could have when the new rate comes into effect next year. Due to the hike, many of them will adopt the unmanned system or hire other parking lot management companies to operate their garages.

In Japan, parking lot businesses are also growing fast. They were not well-known in the past but the industry has managed to continue to grow even during the long-term economic stagnation that the country faced. According to Korea Investment & Securities, sales of the top 9 parking lot-related companies in Japan reached 3 trillion won in 2014. Park 24, which has the biggest market share in Japan, grew 12.6 percent a year on average for 18 years from 1996.

“In Japan the real-estate prices dropped significantly in the early 1990s and many people started to build parking lots using the empty land,” said Kwon Jae-hyung, a researcher at Hana Financial Investment. Park 24 introduced unmanned parking lots called Times 24 and there are now about 150,000 of them across Japan.

Park 24 also made profit from running other businesses at their parking lots. They installed vending machines that sell tobacco products and drinks and even acquired a car rental service company to offer car-sharing services as well. Customers can rent cars parked at Park 24’s garages and pay through a mobile app. The process doesn’t require any human labor so the company doesn’t face the burden of investing more in the business. As of 2015, Park 24 had about 550,000 registered customers for its car-sharing business and is now the biggest car-sharing company in Japan.

Although in the past there were about 5,000 businessmen running private parking garages in Korea, from the mid-2000s a few large franchises started to corner the market. Large building complexes like universities, hospitals and shopping malls started to hire parking lot companies to operate their garages.

GSPark24 and AJ Park are two of the major parking lot operators in the country. GS Group signed a deal with Japan’s Park 24 and launched GSPark24 in 2006. The company is focusing on an unmanned system that will allow people to park 24 hours a day. There are 220 unmanned parking lots operated by GSPark24 in the country.

AJ Park is a subsidiary of AJ Networks and operates parking lots at large building complexes. It currently operates 130 parking lots such as those at Konkuk University Medical Center in Gwangjin District, eastern Seoul, and Times Square in Yeongdeungpo District, western Seoul.

Many foreign parking lot service companies are entering the Korean marker as well. Australia-based Wilson Parking, a subsidiary of Wilson Group, entered the country for the first time in 2005 and operates about 60 parking lots nationwide. Even though the number of parking lot operators is growing, the top 7 companies’ sales are only about 300 billion won, roughly 10 percent of those in Japan. 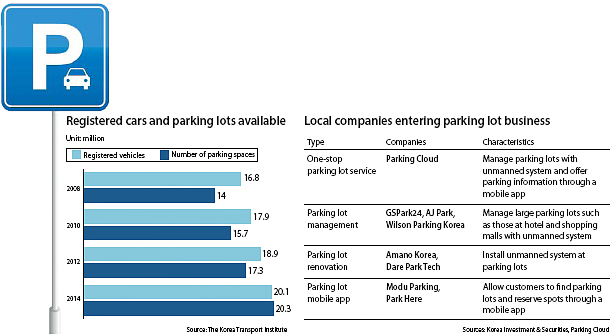 As technology continues to develop there have also inevitably been some changes in the local parking lot business. Recently, some start-ups like Modu Parking and Park Here have introduced mobile apps that provide information on parking lots. Parking Square, which operates Park Here, was acquired by the mobile platform Kakao last year. Such apps allow customers to find the nearest parking spaces and prices and reserve spots in advance.

Parking Cloud is a company that gives tickets to drivers directly through their mobile phones, also storing information on where they parked to make it easier to find their car before they leave. When a driver leaves Parking Cloud automatically charges the customer via the mobile app based on how long they were parked.

There is a big screen on the first floor of Parking Cloud’s headquarters in Seoul and workers monitor more than 400 parking lots 24 hours a day. “We manage all parking lot-related services like reservations and payments through mobile apps,” said Yang Hee-joon, CFO of Parking Cloud.

Some parking lot operators are making profits from other businesses like Park 24 as well. Some rent out spaces to rental car operators or car sharing companies. A lot of parking lots have also installed large digital screens which other companies can use for advertising - for a fee.

There are a total of 436 parking lots operated by Parking Cloud as of last week. That figure has doubled when compared to the end of last year.