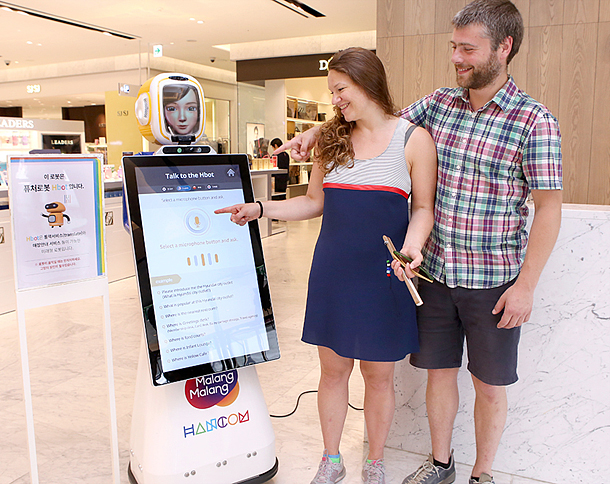 Korea’s first shopping robot that can understand questions and give advice in four languages will start operating Monday at the Hyundai City Outlet in Dongdaemun, central Seoul.

The robot is equipped with an artificial intelligence system that is able to translate foreign languages. Other stores have information-providing robots, but this is the first robot with translation software.

Once a customer selects a language, the robot will understand questions in the language and answer them. The service will be available in Korean, English, Japanese and Chinese at the start and will expand the range to French, German, Russian and Arabic in the future.

The robot uses GenieTalk software, which is capable of recognizing voices and translating sentences.

“Combined with artificial intelligence technology, the usage of robots is evolving from automated and repetitive tasks to being applied to commercial spaces and homes,” said Hancom, the developer of GenieTalk. The company was originally famous for Hangul, a widely used word processing program for the Korean language.

Hyundai City Outlet was selected as the testing ground for the robot due to its high proportion of foreign shoppers, who account for 15 percent of the store’s sales, according to Hyundai.

The company added that the robot will be assisting human guides to help foreigners at the duty free store Hyundai is preparing to open by the Trade Center.

“We’re looking for new ways to employ information technology in enhancing the experience for shoppers that visit our branches,” said the company.