‘La Traviata’ gets a Korean twist with hanbok : Designer Kim Young-jin has adapted the traditional wear so singers can perform

‘La Traviata’ gets a Korean twist with hanbok : Designer Kim Young-jin has adapted the traditional wear so singers can perform 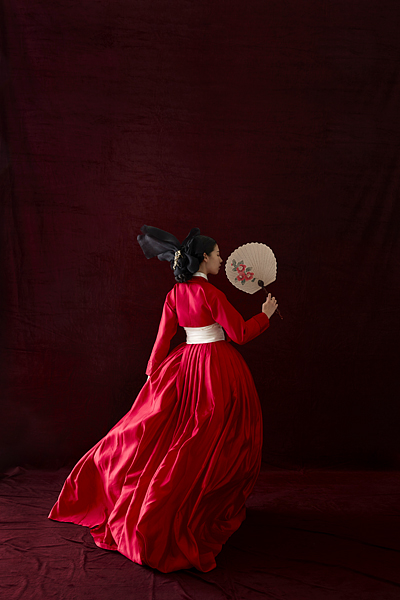 Giuseppe Verdi’s “La Traviata” is one of the most familiar operas to Koreans, since it has often been staged locally to attract beginners to an art that is often considered difficult. In an effort to appeal to a wider audience, the Korea National Opera (KNO) decided to stage the opera with a Korean twist, setting the story not in the original 18th century aristocratic France, but in the Joseon Dynasty’s most stable and prosperous era under King Yeongjo (1694-1776), the 21st king, and King Jeongjo (1752-1800), who succeeded the throne from his grandfather. The era, according to historians, is often regarded as “the era of renaissance” as it was when Korea saw great cultural and social progress.

The storyline of the upcoming “La Traviata” of the Joseon Dynasty is similar to the original, which is based on Alexandre Dumas’ novel “La Dame aux Camelias,” or “The Lady of the Camellias” in English. The story revolves around Violetta, a famed courtesan with failing health, who falls in love with a young bourgeois Alfredo from a provincial family. The struggle for true love becomes contentious and the opera ends tragically with Violetta’s death. The opera usually unfolds on a colorful set filled with eye-catching costumes, showcasing Parisian opulence as Violetta dances and shows off her glamour at lavish parties.

This begs the question - how would a Korean Violetta be portrayed?

To really show the lavish and extravagant beauty of the King Yeongjo and Jeongjo era through costumes, the upcoming KNO production’s director Jung Ku-ho, who is also a fashion designer, turned to Kim Young-jin, a designer of hanbok (Korean traditional dress) at the renowned hanbok brand Tchai Kim, for help.

It was, in fact, Tchai Kim hanbok that triggered the recent boom of young Koreans wearing hanbok to take pictures around the palaces in central Seoul, as her modernized design of hanbok skirts quickly gained attention on social media. Kim’s hanbok designs are usually contemporary, but for the upcoming “La Traviata,” Kim says she stuck to traditional hanbok design and the use of color to “really show the history of the clothing of the era the opera is set in.”

“Hanbok during King Yeongjo and King Jeongjo’s times has a very distinctive silhouette,” said Kim. “The fabric used for the hanbok of that time was especially high in quality and luxurious while the jeogori (upper garment of hanbok) became shorter, highlighting the bell-line design of the skirt. So for the costumes, especially for the protagonist Violetta, I tried to highlight those aspects.”

To learn more about Kim’s hanbok designs for the upcoming “La Traviata,” which will be staged on the outdoor stage of 88 Jandi Madang of the Olympic Park for two days from Aug. 26, the Korea JoongAng Daily sat down with Kim for an interview. Following are some edited excerpts. 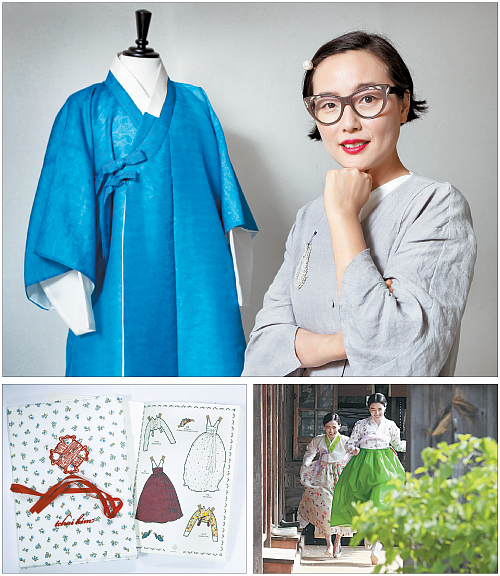 Q. This is not your first time working on costumes, right?

A. I worked on costumes for “Hamlet” last summer but that wasn’t hanbok. Many of Pansori singer Lee Jaram’s stage costumes are my designs. Usually, I only design main characters’ costumes or work on big projects like this where I am in charge of the entire costume design. One was director Park Heung-sik’s 2015 period drama film “Love, Lies” starring actress Han Hyo-joo and Chun Woo-hee. It was a fun experience as I got to work with a director who really understands the visual aspect of the film.

How is the design going? How have you interpreted Violetta’s costumes into hanbok?

I’ve already completed all the designs. To give you an example, in the second scene, Violetta is determined to obey Alfredo’s father and leaves her lover. She’s dying and she’s portrayed as this misfortunate woman. She must feel devastated about her situation with nothing to hope for in her life. I believe costumes can help portray that kind of situation and for this, I’ve designed the hanbok to show various curves and specific colors to express that. Despite her dire situation, she has to continue to dance and entertain the men, so I wanted to make the costume very extravagant, yet make her look graceful and elegant.

The highlight of the opera will be the final scene where Violetta dies. She wears this pure white inner skirt over her head that is five meters long, and on it, I tried to show the falling of the camellia leaves. Whenever I see camellia leaves rustling down in the wind, I really get sentimental and sad. I wanted to express that on stage. Moreover, because it is based on the story “The Lady of the Camellias,” one of Violetta’s hanbok has a large embroidery of a camellia, which has been hand stitched.

In fact, all of Violetta’s costumes are handmade. Usually for costumes for stage performances, costume designers don’t make them by hand as they take a lot of time and money. But when I work, I always think about archiving. When people look back on this Korean version of the show by the Korea National Opera which has been created using traditional elements, I want them to see something different and not feel embarrassed. I want to present hanbok in the utmost quality and detail to really express the beauty of our traditional dress and use props that also can reflect the history of Korea. For example, the hand fan that Violetta holds onto often is an intangible cultural heritage of Korea that originates from Cheongju.

Because this is an outdoor opera, did you have any concerns about dressing opera singers in hanbok?

That has been my biggest homework, actually. Opera singers are so used to wearing western dresses and it will be very difficult for them to sing in hanbok that requires so many layers. Moreover, they are singers so I think it will be quite difficult to tighten the chest area, however it is necessary to create that beautiful silhouette of hanbok. I really tried to design the costumes by thinking like an opera singer and tried to find out what’s most comfortable for them.

It must be quite different designing hanbok for costumes versus designing for your own brand. Do you plan to continue working on costumes if you have the opportunity?

I personally don’t like working only for the brand. Of course I can express my identity and new designs through the brand, but it has to be marketable and be able to be worn by consumers. Even though I want to use really high quality materials, I always have to think about the price and if it could be sold. But for costumes, I am not restrained by any of that. I can use whatever material I want to use and be really creative.