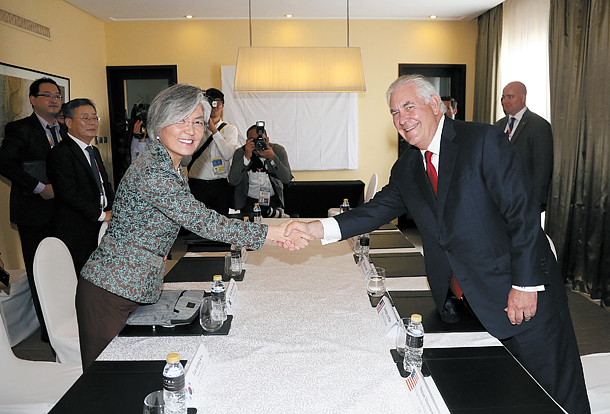 It also bars countries from hiring more North Korean laborers. Opening new joint ventures with the North is prohibited as well as making new investments in current ventures. Nine North Korean officials and four organizations were added to the sanctions list for having supported the regime’s nuclear and ballistic missile programs.

While U.S. Ambassador to the United Nations Nikki Haley called the resolution “the most stringent set of sanctions on any country in a generation,” it still did not include potentially fatal blows to the North. An embargo on oil imports and a ban of the North’s airline were not included.

“We should not fool ourselves into thinking we have solved the problem,” Haley was quoted as telling the UN Security Council. “Not even close. The North Korean threat has not left us, it is rapidly growing more dangerous.”

A top U.S. security official threatened the North with other options including a “preventive war.” In an interview with MSNBC, done earlier in the week and broadcast on Saturday before the UN vote, National Security Advisor H.R. McMaster discussed a military action.

“What you’re asking is are we preparing plans for a preventive war, right?” he said, adding that U.S. President Donald Trump has been clear that a nuclear-armed North Korea threatening the United States is intolerable. “So of course, we have to provide all options to do that. And that includes a military option,” he said.

Still, he said the United States wants to resolve the situation “short of what would be a very costly war in terms of the suffering of, mainly, the South Korean people.”

North Korea reacted with furor, threatening to turn the United States into a “sea of fire.”

“If the United States dares to touch our country by brandishing nuclear sticks and batons of sanctions, the U.S. mainland will fall into an unimaginable sea of fire,” the Rodong Sinmun of the North’s Workers’ Party said in a commentary Sunday. “The insanity Trump and his followers show to escape today’s crisis will awaken our military and people and add more justification to own nuclear arms.”

In another editorial, the mouthpiece of the North also warned of severe consequences to the South and demanded that the Moon Jae-in administration stop supporting U.S.-led sanctions.

The Moon Blue House said Sunday that it is satisfied with the resolution, dismissing the conservative opposition parties’ discontent that an oil embargo was not included.

“It was unanimously adopted in an extremely speedy manner,” a presidential aide said. “The concern that the oil embargo was not included is not important. The important thing is it just took one month for the resolution to be approved, because it normally took three months in the past to persuade China to support a resolution at the UN Security Council. If you count from the July 28 missile launch, it was agreed to after only a week.”

Moon, who returned from summer vacation on Saturday, is expected to have phone calls with his U.S. and Japanese counterparts about the latest developments.

The UN resolution was in response to Pyongyang’s first successful tests of intercontinental ballistic missiles capable of reaching the United States on July 3 and 27. It was the eighth sanctions resolution since 2006.

China, a neighbor and longtime ally of the North, was particularly reluctant to impose tougher sanctions on the North, but Washington appeared to have successfully pressured Beijing with the threat of a trade war. Diplomatic sources said Beijing shifted its position after an article on Politico on July 31. It said the Trump administration’s economic or trade measures to punish China for its lack of efforts to influence the North may come as soon as within a week.

According to the diplomatic sources, the United States removed the option of an oil embargo from a draft of the sanctions to win China’s vote. After negotiations, the final draft was circulated on Friday and a vote took place Saturday. At the same time, a U.S. plan to punish China for alleged unfair trade practice was postponed.

As the United Nations slapped tougher sanctions on the North, the reclusive communist regime’s top diplomat arrived in Manila for a multilateral conference. Foreign Minister Ri Yong-ho is scheduled to attend the Association of Southeast Asian Nations Regional Forum (ARF).

The ARF is the only regional security consultative conference participated in by the North. Its 27 participants include all members of the six-party nuclear talks including South Korea, the United States, China, Japan and Russia.

A series of bilateral meetings took place or were scheduled among the foreign ministers of key countries. It remains to be seen if Ri will have bilateral talks with U.S. Secretary of State Rex Tillerson or South Korean Foreign Minister Kang Kyung-wha. Pak Kwang-hyok, a deputy director from the North’s Foreign Ministry, told Korean reporters that Ri has no intention to talk to Kang.

Upon her arrival in Manila, Kang said she wants to talk to Ri if an opportunity takes place. The foreign ministers of the two Koreas are scheduled to attend a welcome dinner on Sunday evening.

Ri still met with his Chinese Counterpart Wang Yi for about an hour on Sunday. “The two foreign ministers discussed regional affairs and bilateral issues,” Pak said. However, he refused to discuss Ri’s schedule.

According to China’s state-run People’s Daily Online, Wang demanded during his meeting with Ri that the North not conduct any further missile and nuclear tests. According to the report, Wang asked the North to respond calmly and cool-headedly toward the new UN sanctions and stop nuclear and missile tests. It did not discuss Ri’s response.

Foreign ministers of South Korea and the United States also had a meeting on Sunday. Before starting the meeting, Tillerson said they would discuss the two countries’ next move to pressure the North in addition to the UN sanctions.

After the meeting, Kang said they had a productive meeting. She said she and Tillerson discussed the cooperation of China and Russia in the process of adopting the resolution. She also said she explained to Tillerson the South’s efforts to restart contacts with the North for humanitarian issues and to defuse military tensions.

Other bilateral meetings were also scheduled on the sidelines of the forum. Kang and Tillerson will each meet with Wang.