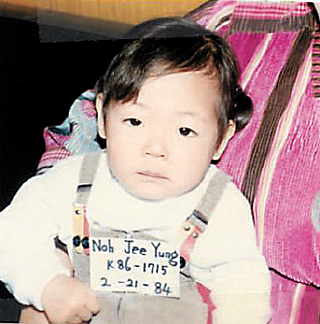 Noh Jee-yung was adopted in 1986 at the age of two and raised as Megan Green in Nebraska in the United States. [MEGAN GREEN]

When Lida Hye Bouts arrived in Seoul last February, she was on the most elemental of human quests: to find her origins.

Bouts was born Lee Da-hye in Seoul on Nov. 10, 1993. Five months later, she was adopted by a Dutch couple, the Bouts, who whisked her away to Amsterdam, where she was raised happily. She majored in Korean Studies at Leiden University and last year did a semester abroad at Seoul’s Sungkyunkwan University.

“As I get older, I just want to see what and where I come from,” she said. “I’m interested in basic, simple things: Do I look like my birth parents?”

Bouts contacted the Korea Social Service (KSS), the adoption agency used by her parents, and requested a family search. In accordance with privacy laws in Korea, the agency contacted the Korea Adoptions Services, an agency run by the welfare ministry, and received the residential addresses of Lee’s biological parents, who were divorced.

The KSS sent letters to Lee’s birth mother and father by registered mail. The letters asked them to contact the KSS because they were being looked for. The letter did not explicitly state it was their daughter looking for them.

The letter sent to the father was returned; no one claimed it. The letter to the mother was received by the mother’s brother, judging by the signature on the registered letter receipt.

But the mother didn’t reply.

Still there was no reply.

Bouts’ quest had hit a brick wall of legal protections for people who give their children up for adoption.

Her quest was over.

Aside from sending letters or telegrams, there is nothing adoption agencies can do to help adoptees find their parents. They cannot get their phone numbers because of the Personal Information Protection Act.

“It frustrates me because it doesn’t seem to value the rights of the adoptees,” said Bouts, who is back in the Netherlands doing her final college year. “I also find it very old fashioned to rely on the mail.

“But I understand it’s not just the privacy law that is keeping me from finding my birth family. I believe that there are other issues” like loss of face for the woman or couple who gave up a baby, and even shame.

An unknown number of those foreign adoptees come back to Korea in search of some part of their past. Many are content experiencing the culture from which they came, working here for a few years or setting up a business. Seoul’s restaurant scene has been enlivened by a wave of adoptee restauranteurs.

But some are determined to find their literal origins: their birth mother or parents.

“We received around 100 family search requests from overseas adoptees last year,” said a manager at Korea Social Service, who asked to be identified by her surname Kim. “Of the 100 cases, about 80 cases produced nothing,” meaning there were no replies to letters, as in Bouts’ case.

“And when they do reply, it’s mostly to clearly express that they do not wish to be contacted ever again.”

Only two to three requests resulted in reunions between birth parents and adoptees, Kim said.

Korea Adoptions Services collects all family search requests from private adoption agencies. It reports that in 2016, there were 1,940 requests from Korean adoptees trying to find their birth parents. Only 102 of them, or 5 percent, ended up meeting their biological parents. The year before, the figure was 91 out of 2,012 requests, or 4.5 percent.

And such reunions are getting harder with time. Parents who gave their babies up after the Korean War were poor and had no choice - and were more likely to agree to meet them two or three decades later.

But adoptions processed in the 1980s and later often involved single mothers, who were afraid of the social stigma attached to unwed mothers. “They have probably found someone to marry after sending children away for adoption, and now have a family,” said Kim. “They are much more reluctant to be reunited.”

In 2016, 880 children were put up for adoption both domestically and internationally. Of the total, 808, or 91.8 percent, were born to unmarried couples.

“While it is important for an adoptee to trace his or her family roots, it is equally important for parents to keep their privacy,” said an official at the adoption bureau at the Ministry of Health and Welfare.

“We have many single mothers in the country, and a large number of birth parents who wish to hide their adoption records. Many have moved on and have families on their own,” the official continued.

Bouts is frustrated because she has a lot of information about her birth family from the time of her adoption, but can’t do anything with it. “I know full names of everyone, birth dates and even the region they lived in,” she said. “I’m not angry at my birth parents for anything. I can even accept that my parents wouldn’t want to know or meet me. I would just really want to meet my sister.”

“I think it would make me more complete if I would meet them,” she said. “I would like to tell them that they made the right choice and that I’m living a very happy and blessed life.”

Left: Lida Bouts returned to Korea in February 2016 as an exchange student at Sungkyunkwan University, 22 years after she was adopted by a Dutch couple. Her search for her family failed as there was no response to letters sent by her adoption agency to her birth parents. Middle left: Bouts’ adoption document drawn up in 1993. Middle right: Megan Green as a 2-year-old before an adoption that sent her to the U.S. state of Nebraska in 1986. Right: Green’s adoption document drawn up in 1986. [LIDA BOUTS, MEGAN GREEN]

Megan Green arrived in Seoul six weeks ago on a second attempt to find her family.

Green is one of 120,000 Koreans adopted by American families since the 1950-53 Korean War, according to 2012 data compiled by the Korean government.

Born Noh Jee-yung, she was adopted by the Green family of Omaha, Nebraska in 1986. She was two years old and suffered from mild cerebral palsy. Growing up, she was forced to use crutches. The Greens had adopted another Korean girl, who was two years older than Megan.

“My adoption story is very bad,” said Green in a matter-of-fact tone. “I am lucky to be alive speaking to you.”

Both adopted daughters were subjected to physical, emotional and sexual abuse by their adoptive parents, she said. The parents are both deceased.

At the age of 15, Green left home with her sister.

Green says finding her birth family would help ease the pain of her youth, which led her to two failed suicide attempts. Her career is as a certified peer support consultant: she works with psychologists to help patients who suffered the same kind of abuse and alienation that she did.

“Because I never felt like I belonged ever, especially in America,” Green said. “White family, white city. Just look in the mirror: I am not white, and the disability on top of that. Just knowing that I belonged somewhere, that I actually was wanted at one point, one time, would help me a lot.”

The answer was “No.”

“They are telling me that because my parents are deceased, they can’t get their permission to release the information,” said Megan in an interview with the Korea JoongAng Daily at a cafe in Seoul.

Green has hit a different brick wall: Her parents are dead, so no information can be disclosed.

“One of the many things I do not understand is why my Korean parents’ information, such as their identification information or their full names, have to be protected after they have died,” Green said.

“In my opinion, my half-siblings do not really have to be protected anymore because they are all in their 40s. They probably have their own families by now. They should be able to make their own decisions as to whether or not they want to know of my existence or have contact with me,” she continued.

“If one sees the situation from the perspective of adoptees, it would be a right move to widen the door [for them to find more about their birth family],” said a welfare ministry official. “But we also have to think about the birth parents’ family. We have to strike a right balance, taking into account all involved: the adoptees, adoptive parents, birth parents and their families. It’s possible the siblings are not aware of the existence of their adopted sibling.”