Culture minister vows to get North at Games

Culture minister vows to get North at Games 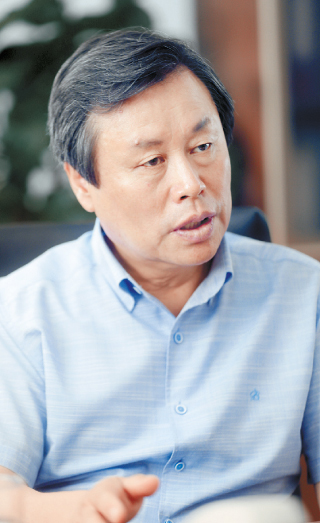 Do Jong-whan, minister of culture, sports and tourism, speaks about North Korea’s participation at the Olympics during an interview with the Yonhap news agency in Seoul on Sunday. [YONHAP]

South Korean Minister of Culture, Sports and Tourism Do Jong-whan vowed continuous efforts for North Korea’s participation in next year’s Winter Olympic Games, due south of the border, despite rising tensions over the North’s repeated missile and nuclear provocations.

In an interview with Yonhap News Agency on Friday, Do said the government will keep trying to hold sports exchanges with North Korea, although the current situation is not ideal, following Pyongyang’s latest launch of an intercontinental ballistic missile (ICBM) and Seoul’s decision to deploy the Terminal High Altitude Area Defense (Thaad) system.

“A realistic military standoff exists in inter-Korea relations,” Do said. “It’s feared that our [sports exchange] efforts will end in vain, if an ICBM is fired [in the North] and the Thaad battery is deployed.”

Do, however, said efforts to maintain sports exchanges between the two Koreas must go on since the process itself is important.

“Problems get solved when military tensions ease after reaching a peak,” he said. “That’s repeatedly happened in inter-Korea relations, so we have to continue our efforts until the end.”

Do said the South is pushing to bring in the North Korean athletes to the PyeongChang Winter Olympics with help from the International Olympic Committee (IOC). For the Paralympics, he added that the South is pursuing North Korean participation through its own channel.

“The IOC’s stance is basically to have the two Koreas exchange peacefully through sports and North Korea participating [in the Olympics],” he said. “But if the South is hasty, it may be forced to take responsibility for the outcomes, and many unexpected things could occur. So all the plans should be approached step by step with a broad perspective.”

Do said inter-Korean exchanges in other sports are also being discussed. In June, a North Korean taekwondo demonstration team performed at the World Taekwondo Championships in South Korea.

“World Taekwondo [WT] chief Choue Chung-won met with North Korean IOC member Chang Ung last month to discuss the WT demonstration team’s performance in North Korea in September,” he said. “Discussions are also under way for North Korea’s participation in the Asian Cup and Asian Inter-Club Weightlifting Championships [in Yanggu, Gangwon]. Since weightlifting is a sport that North Korea collects medals in, we have a high expectation of its participation.”

“I think the G-100 and the torch relay events will be important for the promotion of the Olympics,” he said. “We will escort our president to PyeongChang when there are events. Not only the Gangwon provincial government or the organizing committee, but the [central] government will also step up to promote the Olympics.”

When asked about the post-Olympic plans for the competition venues, Do said he will come up with “sustainable measures.”

“Our biggest headache will be financial problems regarding the venue operations after the Olympics,” he said. “Our task force unit will prepare a sustainable operation plan for the venues.”