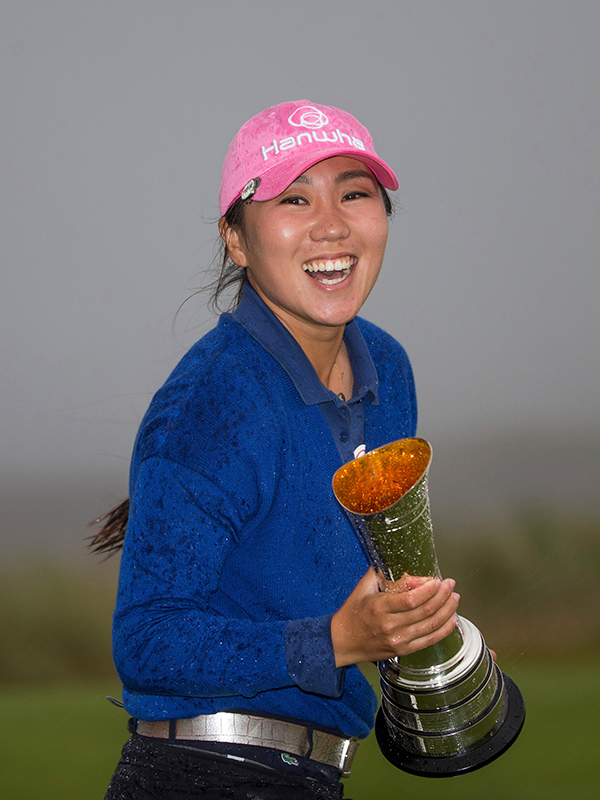 Kim In-kyung has finally done it. On Sunday, she won her first major tournament on the LPGA tour at the Ricoh Women’s British Open at Kingsbarns Golf Links.

Five years ago, Kim became a household name after missing a one-foot putt on the last hole of the Kraft Nabisco Championship. Ever since, her golf game has been in the rough.

As if that wasn’t bad enough, her confusingly bad putt has been televised every year since, as though it’s so awful as to be perennially instructive or, worse, perennially amusing.

But then Kim turned a corner. In October 2016, she clinched a victory at the Reignwood Classic in China. Then in 2017, she won the Shoprite Classic and Marathon Classic, winning a tournament each in three consecutive months.

She began the final round with a birdie on the par-three first hole, landing her shot within one foot of the pin. But this time, she tucked it in for a six-shot lead.

Jodi Ewat Shadoff of England and Michelle Wie of the United States tried to catch up, and made solid efforts with four consecutive birdies in the front nine, but to no avail. Kim finished the front nine one under par, making two birdies and a bogey, and shot an even-par on the back nine to finish her round at one under-par, 71.

But she made no birdies on the back nine, leaving the game open until the par-four 17th, which was set to be played at 414 yards. Kim took her stance, adjusted her grip, swung back and sent the ball to within 188 yards of the pin. She took out her 5-wood and hit the green.
When Kim hit the green on the final par-four hole, she was all smiles.

“I feel quite uplifted, I have to say, because I really didn’t expect to win this week,” Kim was quoted as saying on the LPGA website. “I think I managed it quite well.”

Due to the rain and wind at Kingsbarns Golf Links, Kim had to play with 214.50 yards of driving distance, but managed to hit 15 greens out of 18.

Her bogey-free round of 66 on the third day cost her, however, and she came up one shot shy of tying the tournament record with Karen Stupples of England at 19 under par, set during the 2004 British Open at Sunningdale Golf Club in Berkshire, England.

“I think we judge ourselves a lot, everybody does,” Kim said. “But for our own selves, I think sometimes you’ve got to have some self-compassion. And we can make some mistakes. But I hope mistakes will make a more positive impact in life instead of dwelling on it. If you think about it, I think the present moment is more special.”

Kim’s victory has also extended Korea’s dominance on the LPGA tour to four consecutive tournaments and a total of 12 out of the 22 so far this season.

The Solheim Cup will resume on Aug. 18 to 20 in West Des Moines, Iowa.