Ryu Hyun-jin returns from injury with a bang

Ryu Hyun-jin returns from injury with a bang 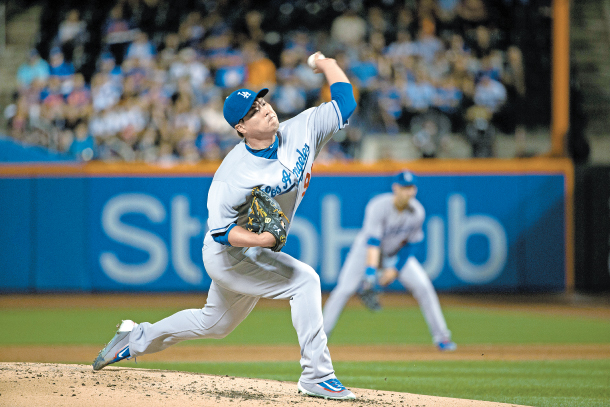 Ryu Hyun-jin of the Los Angeles Dodgers pitches against the New York Mets at Citi Field in New York on Sunday. [AP/YONHAP]

Ryu Hyun-jin of the Los Angeles Dodgers had a great game after returning from a hip injury, picking up his fourth victory of the season against the New York Mets at Citi Field in New York on Sunday. With another 8-0 victory over the Mets, the Dodgers swept the three-game series.

Ryu got off to a great start by striking out all three batters in the first and the first batter in the second. Though he gave up a hit to Travis d’Arnaud in the third, Ryu managed to strike out the next two batters and concluded the inning with a ground out. Ryu struck out another two additional batters in the fourth and fifth innings.

During the seven innings he played, Ryu gave up only one run and struck out eight batters. He was switched out for Tony Cingrani while the Dodgers were leading 7-0 at the top of the eighth. This was Ryu’s first win since the game against the Cincinnati Reds on June 18 and lowered his ERA from 3.83 to 3.53. In addition, Ryu threw scoreless innings for his second consecutive game, totaling 15 scoreless innings including the game against the Minnesota Twins on July 25.

This was the first time since Ryu’s Major League debut in 2013 that he gave up only one hit in a game.

“Tonight, Hyun-jin set the tone,” Dodgers’ manager Dave Roberts was quoted as saying on MLB.com. “From the first pitch to his 90th or whatever [actually 96] he was very aggressive. We talk about having that conviction and attacking the strike zone, which he did with his entire mix. Outside of one hard-hit ball by d’Arnaud, a lot of soft contact.”

Ryu’s fastest pitch was recorded at 146 kilometers (90.7 miles) per hour. Though Ryu wasn’t able to produce enough speed, he showed great control in the pitches, where he led the batters to swing targeting the corners of the strike zone. Throughout the game, Ryu threw a total of 22 cut fastballs, 17 changeups, 20 curves, four sliders and 33 four-seam fastballs.

“My body feels good and it is similar to what I was before having surgery,” Ryu was quoted as saying on Yonhap. “I know I have to work on my velocity going down as I threw more innings, but other than that, I’m all right.”

Unlike the other games, where Ryu was given no-decision in his last four games, the Dodgers’ batters also played a big role in helping Ryu to pick up his fourth victory. Just like Ryu’s pitching, the Dodgers got off to a great start, scoring three runs at the top of the first.

With a sweep of the three-game series, the Dodgers continue to lead in the major league’s winning percentage, at 0.712 while recording 79 wins and 32 losses for the season as of Sunday.

Despite Ryu’s strong performance, he still faces one challenge this season. As the Dodgers recently brought in Yu Darvish through a trade with the Texas Rangers, the competition for a spot in the team’s starting rotation has become has become much tougher.

Since Ryu picked up his fourth victory two days after Darvish picked up his first for the Dodgers, it has definitely helped Ryu concentrate more in games.

“My future goals are to stay in the rotation and stay healthy,” Ryu was quoted as saying on Yonhap.