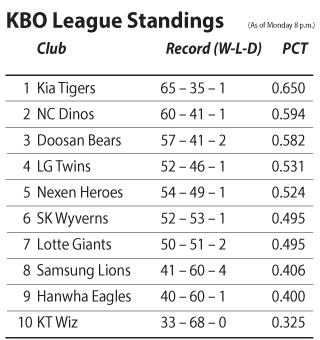 While the Kia Tigers are still holding a big lead in the KBO this season, the Doosan Bears are slowly climbing up the standings to compete against the Tigers and the NC Dinos.

With a come-from-behind 10-3 victory against the LG Twins at Jamsil Baseball Stadium on Sunday, the Bears are now in a seven game winning streak. With a sweep of the three-game weekend series against the Twins, the Bears are now five games ahead of their home stadium rivals. In the second half of the season, the Bears have recorded 15 wins one tie and two losses and are now only 1.5 games away from the Dinos, the second ranked team.

Despite a shaky start to the season as the team struggled to get back on form, with Michael Bowden off due to a shoulder injury, the Bears are once again dominating the KBO. The return of Bowden and the return to form of Chang Won-jun has helped the Bears return to the pitching powerhouse that they were last season. The Bears’ batting average, which was once ranked ninth in the KBO, has now jumped to second, right behind the Tigers.

Though they lost the first two games, the Dinos concluded their three-game series with a 4-1 win against the Samsung Lions on Sunday. With a victory, the Dinos became the second team this season to achieve their 60th win.

While the SK Wyverns, the sixth-ranked team, lost their game on Sunday to the KT Wiz, the Lotte Giants, the seventh ranked team, defeated the Nexen Heroes 6-4 to get right behind the Wyverns in the league standing. The Giants swept their three-game weekend series against the Heroes for the first time in seven years and three months.

The Tigers’ game against the Hanwha Eagles in Daejeon got cancelled due to rain on Sunday, but the Tigers still won the weekend series, as they defeated the Eagles in the first two of three games. 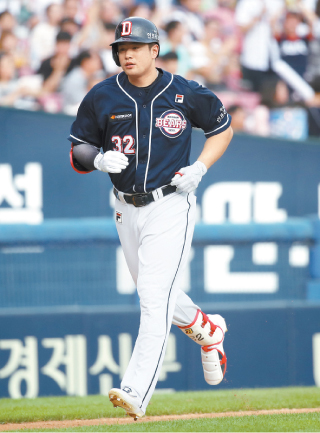 Doosan Bears’ fourth batter Kim Jae-hwan’s bat exploded over the weekend. While the Bears were tied at 2-2 at the top of the third on Sunday, Kim hit a two-run home run over the left fence against the LG Twins’ right handed pitcher Kim Dae-hyun, to allow the Bears to take the lead. Prior to Sunday’s game, Kim hit a finishing home run on Saturday to lead the Bears to a 2-1 victory.

With Kim’s two home runs on two consecutive days, he is now tied for second in the KBO’s home run standing along with Han Dong-min of the SK Wyverns. In addition, Kim had scored a run for 11 consecutive games, since the Bears’ game against the KT Wiz on July 26, tying for third in KBO’s RBI ranking.

With that, Kim became the fifth player in KBO history to have recorded an RBI for 11 consecutive games.

Kim graduated from Incheon High School and made his KBO debut in 2008, drafted in the second round by the Bears. During his debut season, Kim appeared in a total of 14 games. After serving his military service in the Sangmu baseball team, Kim returned to the Bears in 2011, where he played as the Bears’ designated hitter, appearing in 30 games.