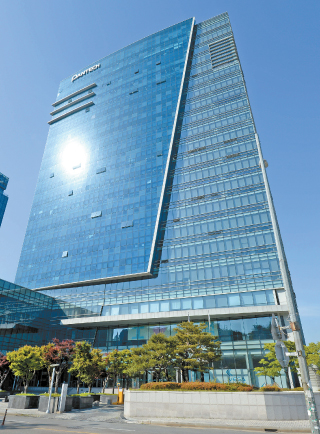 Since acquiring Pantech in 2015, Solid, a Korean telecom device manufacturer, has poured a total of 111.7 billion won ($99 million) into the ailing smartphone producer.

Of the total, 46.7 billion won was for the acquisition and another 65 was for loans and investments to revive the once leading mobile phone brand. Even so, Pantech has never managed to rebound from three consecutive years of losses.

The company is now not even able to afford to pay some 100 million won to the Korean Intellectual Property Office every month in order to maintain ownership of some 3,000 patents.

After having turned over 230 U.S. patents in May to Seoul-based Gold Peak Innovation, a patent holding firm, Solid is now being criticized for trying to capitalize on the patents Pantech owns. Pantech is thought to have possessed as many as 2,036 domestic and 1,111 overseas patents at one time.

“Pantech made it clear in the audit report at the end of last year that it plans to improve its financial structure through profit from patents,” said Chung Joon, CEO of Solid and Pantech. “It’s a decision that Pantech has made and it is not appropriate to raise the theory that the top shareholder is trying to eat and run.”

The parent company, with a 96 percent stake in Pantech, is struggling to decide whether it should keep the company or not.

Pantech shut down its smartphone business in May after it failed to establish a joint venture in Indonesia. Now, its financial situation has put it on the verge of ending its Internet of Things (IoT) communications module business as well. Should there be an optimal candidate to purchase Pantech, Solid may sell not only the IoT business but also all the patents to resolve the deficit.

Solid’s net loss in the first quarter was 18.2 billion won - largely due to Pantech - approaching the stage where the company’s capital is impaired. 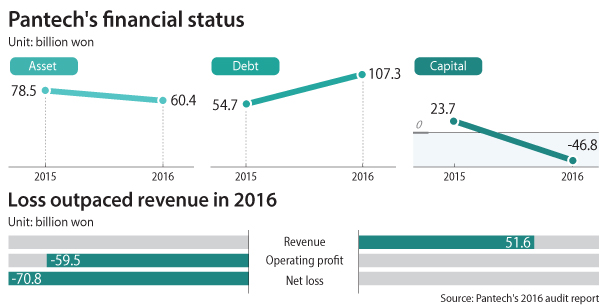 Ever since hitting its peak with the hugely successful SKY phone 19 years ago, Pantech went through two different periods of debt between 2007 and 2014 due to a liquidity crisis.

In 2011 and 2012, the phone manufacturer bet on expensive premium smartphones, setting the price of its Vega Racer series similar to Samsung’s flagship Galaxy devices, but in vain. It filed for court receivership in August 2014, and the court approved a local consortium’s plan to resuscitate the cash-strapped company in May 2015.

Before acquiring Pantech, Solid was preparing at the end of 2013 to enter the Indonesian market to launch a communication device and internet protocol TV business.

But as the company formed a consortium with Optis, a Korean optical device manufacturer chaired by Byun Yang-kyun, former chief presidential secretary with sizable business ties to Indonesia, the plan changed. The consortium decided to acquire Pantech first and make a foray into Indonesia on the back of the company’s smartphones.

Contrary to expectations that the former high-ranking government official would facilitate the process, the path to successful entry into Indonesia was bumpy from the beginning.

The consortium planned to pay six billion won for the down payment and intermediate payments and then pay the remaining acquisition fees later by extending loans.

But the potential loan provider abruptly destroyed the deal and Optis filed for court receivership in May 2016, a year after acquiring Pantech. Solid was left alone to deal with the remaining acquisition costs and the task of advancing into the Indonesian market.

In the mean time, the Indonesian government raised the bar for foreign smartphone companies in the local market. The government introduced a regulation in 2015 that any smartphone on the long-term evolution network must contain at least 20 percent local components. The figure was increased to 30 percent this year and will advance to as high as 40 percent in 2019.

The measure means that Solid’s entry into the Indonesian smartphone market on its own is impossible. As a result, Pantech tried to join hands with a local business partner, but potential partners wanted proof that Pantech was in a stable position.

In an attempt to prove its stability, Pantech released the budget smartphone IM-100 under the SKY brand in June last year - the first product since the Solid-Optis consortium acquired the company. Despite wireless charging and a versatile wheel key - unique features for a budget device - the product barely made a hit amid competition against established brands like Samsung and LG.

“Solid has been dragging the business amid prolonged uncertainties from the point of acquiring Pantech,” explained Kim Byung-jin, chief financial officer of Solid. “Due to a lack of financial sources, we couldn’t afford to think about alternative plans in every step of the business.”

IT experts cite the Solid’s incorrect analysis of the Southeast Asian market as the key culprit behind Pantech’s failure. It could avoid fierce competition with smartphone behemoths such as Samsung and Apple but wasn’t aware that the market was already dominated by budget phones from various producers.

According to market researcher IDC, the most popular smartphones in Indonesia, Malaysia, Vietnam and Thailand as of the second quarter last year - just before Pantech’s SKY Phone was launched - were Samsung’s Galaxy J series and Chinese producer Oppo’s Neo 5.

Some experts point out that Pantech concentrated on forming a joint venture in Indonesia without boldly altering its strategy.

“If it was that hard to enter the smartphone market in Southeast Asia, Pantech could have thought about entering a country where smartphone penetration was extremely low or jumping into a second phone market,” Park Yong-hu, a long-time tech market observer and CEO of PYH, a media advisory firm.

If Pantech sells its IoT unit, only a small number of workers devoted to selling the remaining patents will be left.

“Every member of Pantech is deliberating on measures to cope with the crisis at this moment,” said a Pantech spokesman.