Lineage 2 to hit Japan this month

Lineage 2 to hit Japan this month 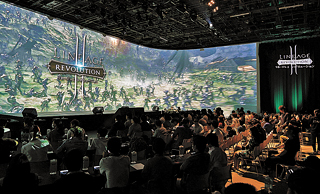 Netmarble Games showcases Lineage 2: Revolution to Japanese users on Sunday at the pre-launching party in Tokyo. The game will be officially released in Japan on Aug. 23. [NETMARBLE GAMES]

The game developer said on Monday that Revolution will be released in the Japanese market on Aug. 23, four months after the company started accepting preorders there. Pre-registrations for the game exceeded one million last week.

“A million is a rare figure,” explained a spokesperson from Netmarble, “given that mobile games under public attention normally receive 500,000 to 700,000 pre-orders.”

The company held a pre-release party in Tokyo on Sunday, where it invited local fans for a series of events, including game demonstration. Netmarble announced the release date for Japanese users during the event. The party was streamed live through YouTube and Twitter, the company said, during which it received more than 2 million views.

Revolution Asia was launched on June 14 in 11 countries in Southeast Asia, including Thailand, Hong Kong, Singapore and the Philippines, where Netmarble attained more than 2 million pre-registrations.

The game became the top-grossing app of Apple Stores in Taiwan, Hong Kong and Macau on its first day of release, and topped app stores for Google and Apply in six countries after eight days.

Japan will be Revolution’s last stop before it travels to the Western market. It will also travel to China, where the game developer has a partnership with Tencent, a Chinese internet giant. “The launch in the Western markets will take place in the fourth quarter [of this year],” said the Netmarble spokesperson. “For China, we don’t have a set date yet but it will be some time this year. We are still working on fully localizing the game.”