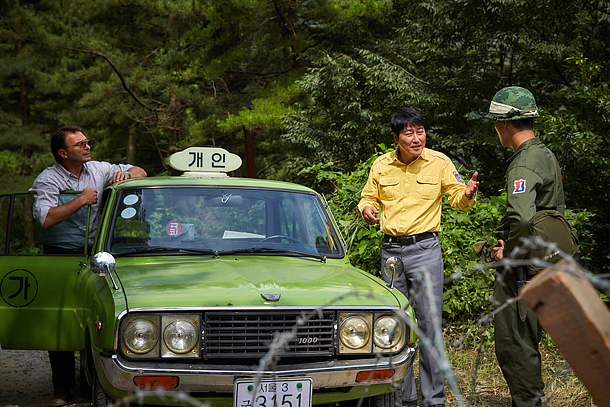 “A Taxi Driver,” set during the Gwangju uprising in May 1980 took the top spot from “The Battleship Island” and won Korea’s weekend box office. [SHOWBOX]

Starring Song Kang-ho and German actor Thomas Kretschmann, “A Taxi Driver” dominated the local box office from Friday to Sunday, selling an impressive 2.95 million tickets at 1,906 screens in its debut weekend, accounting for 63.7 percent of the weekend’s entire ticket sales.

Set during the Gwangju uprising in May 1980, the film revolves around the journey of a taxi driver (Song) and an ambitious German reporter (Kretschmann) who head to Gwangju, in the southwestern part of the country, to cover the Gwangju protests and the subsequent massacre that ensued. The movie, distributed by Showbox, has so far sold 4.36 million tickets since it hit theaters on Aug 2.

Song was named Best Actor last week at Montreal’s Fantasia International Film Festival for his role in the film.

CJ E&M’s controversial blockbuster “The Battleship Island” came in a distant second in its second weekend, a relatively shabby performance compared to last weekend’s 2.51 million. The film, about Korean forced laborers on Japan’s Hashima Island during World War II, has been mired in controversy for a number of reasons, ranging from its approach to the sensitive historical issue to its domination of theatrical screens.

The historical fiction, about Korean forced laborers on Japan’s Hashima Island during World War II, sold 692,000 tickets at 1,017 screens in its second weekend, accounting for 15.1 percent of the entire ticket sales. The movie, starring big names like Hwang Jung-min, So Ji-sub and Song Joong-ki, has so far sold 6.08 million tickets since it was unveiled in theaters on July 26.