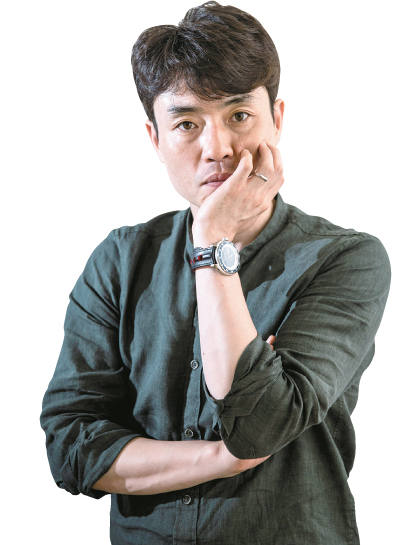 Director Ryoo Seung-wan’s latest historical blockbuster “The Battleship Island” which hit theaters last month has been one of the most anticipated Korean movies this summer. To portray the harsh struggles that Koreans faced when they had to work as laborers at Japan’s Hashima Island, Ryoo and his crew worked tirelessly to recreate the island’s surroundings from 70 years ago. For the 44-year-old director whose filmography is mostly dominated with action films such as the hit “Veteran,” which sold over ten million tickets domestically, it may seem a bit odd that his latest work deals with Korea’s tragic history from 70 years ago. Magazine M, an affiliate of the Korea JoongAng Daily, sat down with the director to learn about the film’s production process and more.

A. Releasing a movie is always a nerve-wracking experience, but I felt even more nervous with “The Battleship Island.” I did not think that it would become this popular. This movie was a project to add cinematic imagination to a tragic history, but there are some people who view this film as if this is a film with a historical responsibility. Since the production cost was so high, I had the thought that I needed to deliver a quality film, but as the movie’s release date was coming close, I felt more burdened.

Do you feel nervous about the film’s box-office performance?

I wouldn’t say I am. For me, what is more important is if this film is produced in the way that I want it to be, and if it is communicating well with the viewers. Of course, the movie’s box-office performance is also important, as a large sum of money has been put into the work. But, if I had wanted to go for a more financially successful film, then I would have made a sequel of 2015’s “Veteran.”

When did you start making “The Battleship Island?”

Back in 2012, when the movie “The Berlin File” was coming to an end, the writer who wrote the initial script for “The Battleship Island” and the CEO of one of the movie’s production companies K Film showed me a photograph of the laborers on the Hashima Island and suggested to make it a movie. I was drawn into the film, but back then, I was ignorant of the history of Hashima Island. I did not have a clue as to how I would portray the island on the movie screen, but because it is not a simple problem, I calmly waited for an opportunity. When “Veteran” was released, I could not hastily reveal that my next film would be “The Battleship Island,” because I was doubtful whether I could produce this film.

Why did you insist on making this film?

When I was a young kid, I was really into war movies set in World War II. I really liked “The Great Escape” (1963), “Where Eagles Dare” (1968), “The Guns of Navarone,” (1961), and 1967’s “The Dirty Dozen.” I decided to make films that were about this time period, and “The Battleship Island” takes place in a similar era. In a way, I was drawn into the suspense that an enclosed environment like an island gives. However, one thing that troubled me was the fact that this movie is about Korea’s actual history. The actual laborers who were on Hashima Island are still alive, and when I was interviewing organizations that work with them, I felt that I owed them something.

Director Ryoo Seung-wan’s latest historical drama revolves around the Korean laborers who were forced to work on Japan’s Hashima Island 70 years ago. It stars veteran actors such as Hwang Jung-min, So Ji-sub, Song Joong-ki, and Lee Jung-hyun. [CJ ENTERTAINMENT]

Before you shot the movie, did you visit Hashima Island?

In November 2015, I visited the island. It felt like looking at an old historical site. After the site was closed in 1974, it remained deserted. I was fascinated by the island’s odd ambiance. Actually, after I visited the island, a large part of the script changed. The odd surroundings that the Korean laborers saw when they arrived on Hashima Island has been added to the movie.

After 2010’s “The Unjust” and “Veteran,” this is your third time working with actor Hwang Jung-min. How do you feel about him?

For me, there are three categories which define a good actor. First, the type of actor that I want to film on camera, and second, an actor who shows good acting skills, and lastly, actors who feel like co-producers of the film, like they are taking part in the movie. Actor Ryoo Seung-bum who is my younger brother, and Hwang Jung-min, feel like actors who fit in the third category. They are not just actors, but they also share responsibility with me for the movie. If an actor only cares about themselves, then they tend to act all elegant and graceful, but Hwang sometimes even feels like a producer or like the youngest member of our crew. He really took part in making this film.

How was it working with So Ji-sub, Song Joong-ki and Lee Jung-hyun?

So Ji-sub is the kind of actor who feels as grand as the Amazon. He has so much potential. As if he is in the supporting cast, he does his best even when there is no one watching. As for Song, I really like his attitude towards life and his warm heart. Even though he is already a successful actor, he still strives for change and really works hard. Lee is already a great actor.

How was working with the child actor Kim Su-an?

Actually, the role of Hwang Jung-min’s daughter’s was supposed to be played by a teenage actor who is ten years older than Kim. However, even after many auditions, we could not decide on the role. Then, Kim Su-an, who I have worked with in the past, popped up in my head. At first, the staff thought that she was too young for the role, but after her audition, they were satisfied with her acting. I think compared to other young actors, she does not try to win compliments or try too hard.

There is a scene where she is washing clothes with an old washing board, and she was accidentally handed a new washing board instead of an old one. She thought quickly on her feet and grabbed a bar of soap and rubbed it on the washing board to make the board look old. The staff and I were really surprised.

Is it true that the movie set was two-thirds the size of the actual Hashima Island?

Hashima Island itself is also one of the main characters in the movie. I wasn’t even sure if I could properly convey the island on screen. I needed popular actors, and a Chinese firm also offered to invest in this movie. There were actually Chinese laborers in the Hashima Island, and the company said that if I hire Chinese actors, then they would invest in the movie. As I was desperate for money, I thought about it, but I eventually turned it down. I thought that if I also included Chinese stories as well, then the movie would feel too all over the place. The movie’s set was not in the best condition, but I think it turned out fine. I think the computer graphics team who made the movie set look more realistic really played a big role in the movie.

The first part of the movie has more of a poised feel to it, and it does not simply label the Japanese as evil, and Koreans as kind. However, compared to the beginning part of the movie, the climax is very brutal. Is there a reason why you chose to do it this way?

I wanted to deliver the feeling of a powerful physical experience similar to the emotions that the characters went through, like the audience is escaping from the island along with the laborers. I also utilized the actual weapons that were used in the island such as the coal lumps and shields.

Wasn’t it hard to portray an actual historical event?

I was very careful. I think there will be some critical views as well. The movie’s ending that 400 Koreans escaped from the island is not a true story. However, in the movie’s ending, I wanted the emotions that the Korean laborers had suppressed to burst out in the end.