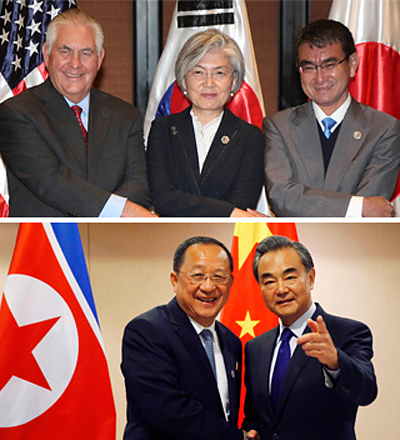 The encounter wasn’t planned for, the South Korean government source said, although Kang had mentioned she wished to meet Ri.

“It wasn’t the kind of situation where one person actually walked towards the other,” said the official. “The two naturally started talking while all the ministers were casually exchanging handshakes.”

According to the official, Kang pointed out to Ri that North Korea has yet to give any response to South Korea on its offer to hold bilateral talks, and urged Pyongyang to positively respond soon. Ri was said to have told Kang that Seoul’s offer lacked sincerity because the South Korean government was putting pressure on the North Korean regime alongside the United States.

Kang told Ri that Seoul’s proposition did contain sincerity, asking him again to accept the request.

Pyongyang has not given any direct response to Seoul on an offer to hold inter-Korean military talks to cease all hostility near the border. Neither has it responded to Seoul’s request to discuss a reunion for war-torn families.

The offers, separately relayed on July 17 by the Ministry of National Defense and the Korean Red Cross, were a part of President Moon’s inter-Korean peace vision, described in a speech on July 6 at the Koerber Foundation in Berlin during his trip to Germany for a Group of 20 summit.

Moon’s four-point strategy on the North included easing military tensions at the inter-Korean border, a reunion of families separated by the 1950-53 Korean War, North Korea’s participation in the 2018 PyeongChang Winter Olympics and inter-Korean dialogue.

On Monday, a day after the North threatened to turn the United States in a “sea of fire,” an official statement issued through the state-run Korean Central News Agency read that the regime would “completely reject” the UN Security Council’s latest sanctions, adding that the U.S. will “pay back a thousand times in return.”

The new resolution, which was drafted by the United States and unanimously passed by the council last Saturday in New York, is expected to reduce North Korea’s annual exports of $3 billion by a third, blocking the country’s exports of coal, iron, iron ore, lead, and laborers.

North Korea’s ICBM tests, the latest on July 28, are expected to be high on the agenda in this year’s Asean meeting, where top envoys of every country that participated in the six-party talks are attending. The talks on North Korean denuclearization, joined by the two Koreas, the United States, China, Russia and Japan, have been stalled since 2009, when Pyongyang walked out.

On Sunday when Foreign Minister Kang met with her Chinese counterpart Wang Yi on the sidelines of the ARF, a South Korean government official with knowledge of the talks said Wang expressed “regret” that Seoul went ahead with the deployment of the Terminal High Altitude Area Defense (Thaad) antimissile system, saying the recent decision to place four more launchers were a major “setback” to bilateral relations, which had been “on the verge of improving.”

Wang was quoted as telling Kang that Seoul-Beijing relations were off to a good start after Moon was elected because he “showed the will to change what had gone wrong in the past.”

Both countries will have to have “deep discussions” in order to improve relations, Wang said, to which Kang reportedly agreed.

Kang was said to have explained to Wang that Moon’s decision to deploy four more Thaad launchers was a “defensive measure” in the face of North Korea’s missile threats.

In a trilateral meeting between Kang, U.S. Secretary of State Rex Tillerson and Japanese Foreign Minister Taro Kono on Monday, the three countries agreed to cooperate against North Korean provocations, acknowledging that the regime’s nuclear and missile capabilities have “significantly advanced” recently, according to excerpts from South Korea’s Foreign Ministry.

Seoul, Washington and Tokyo were said to have agreed that their ultimate goal on the North was the “irreversible” denuclearization through peaceful means, and that additional pressure and sanctions will help the regime change its attitude on the issue.