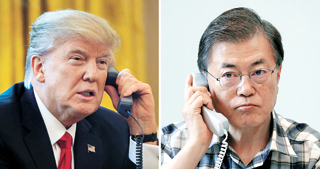 President Moon Jae-in and U.S. President Donald Trump shared concerns about North Korea’s missiles and agreed to impose a “maximum level of pressure and sanctions” to induce it to abandon its missile and nuclear ambitions during a phone conversation on Monday, the Blue House said.

Moon, who returned from a five-day vacation on Saturday, talked to Trump for 56 minutes on Monday morning Seoul time, two days after the United Nations imposed the strongest sanctions to date on North Korea for two intercontinental ballistic missile launches last month.

Blue House Spokesman Park Soo-hyun reported that the two leaders agreed that they should pursue “the maximum level of pressure and sanctions” to induce the North to “make the right choice of giving up its nuclear and missile programs.”

According to a presidential secretary, Moon did most of the talking while the businessman-turned-president mostly listened.

On Resolution 2371, unanimously approved by 15 UN Security Council member states on Saturday in New York, Trump said it was a sign of a “very important change” in the global community over how to tackle the North Korean nuclear problem, an apparent reference to votes by Moscow and Beijing, according to the Blue House.

Trump also emphasized that inducing change in the North’s behavior requires a “firm stance” composed of “strong pressure and sanctions.”

The latest UN sanctions are intended to cut the North’s annual export revenue by $1 billion, about one third of its total, by banning key exports of coal, iron, iron ore, lead, lead ore and seafood. But it fell short of requiring China to stop supplying the Pyongyang regime with fuel, a lifeline for its already isolated economy.

Shortly after the passage of the UN resolution Saturday, Trump tweeted that it was “the single largest economic sanctions ever on North Korea.”

During the nearly one-hour talk, Trump inquired about Seoul’s recent dialogue overtures to Pyongyang to discuss holding family reunions and easing military tensions along the border, which were ignored by Pyongyang.

Moon told Trump that the international community needs to show North Korea that the “door for dialogue” is open as long as Pyongyang makes the prudent decision to give up its nuclear weapons.

Spokesman Park said Moon explained to Trump that his proposal to hold reunions of families separated by the Korean War was made on a humanitarian basis and that a proposed military talk was intended to prevent unexpected military clashes along the border by restoring a military communications hotline.

Moon stressed that North Korea “should be brought to the point” that it can no longer withstand crushing sanctions.

Moon also stressed there should be no outbreak of war on the Korean Peninsula, which was devastated by the 1950-53 Korean War, expressing the need to solve the North Korean problem “in a peaceful and diplomatic” manner through close Seoul-Washington coordination.

While Moon did not experience the conflict six decades ago himself, he was born to North Korean refugees who boarded a U.S. navy ship from the North Korean port city of Heungnam to escape from Communist rule, leaving behind relatives at the height of the conflict in December 1950.

Moon also asked Trump for his assistance in revising bilateral missile guidelines signed by the two, which prohibits Seoul from developing a ballistic missile with a range of over 800 kilometers (497 miles) and a payload of over 500 kilograms (1,102 pounds). Seoul wants to raise the cap to 1,000 kilograms so that its missiles can be more effective against North Korean threats.

While calling Seoul-Washington relations a “great partnership,” Trump pointed out that the U.S. spent a lot on the bilateral alliance, a reiteration of his campaign theme that U.S. allies should pay more for their military defense, according to the Blue House. He also said revising the Korea-U.S. free trade agreement was needed, citing trade deficits with Korea.

Moon expressed his hopes for smooth talks between the countries on the FTA issue as Korea’s new chief trade representative, Kim Hyun-chong, was recently appointed. On the U.S.’s defense budget for Korea, Moon said a large portion of an increase in Seoul’s defense budget would be spent on purchase of cutting-edge American weapons, helping to narrow the U.S. trade deficit with Korea.

Following his talk with Trump, Moon also conversed with Japanese Prime Minister Shinzo Abe for 23 minutes from 4 p.m. Monday. During the talk, the two shared concerns over the North’s growing missile capability.

As in his talk with Trump, Moon said the North Korean issue should be addressed and resolved in a “peaceful and diplomatic manner” and close coordination among Seoul, Tokyo and Washington was required to that end, the presidential spokesman said.

The two leaders also agreed on the need to put the “maximum level of pressure and sanctions” on Pyongyang.

“President Moon and Prime Minister Abe shared their judgement that they should strengthen pressure and sanctions as North Korea shows no interest in talk amid its repeated provocations,” said spokesman Park.

Abe told Moon that while it required dialogue to resolve North Korea’s nuclear and missile problems at the final stage, he highly valued the fact that the two leaders were on the same page that they should impose pressure on the North to bring it to the negotiating table.

The two did not discuss the issue of Korean women forced to work as sexual slaves for the Japanese Imperial Army during World War II.