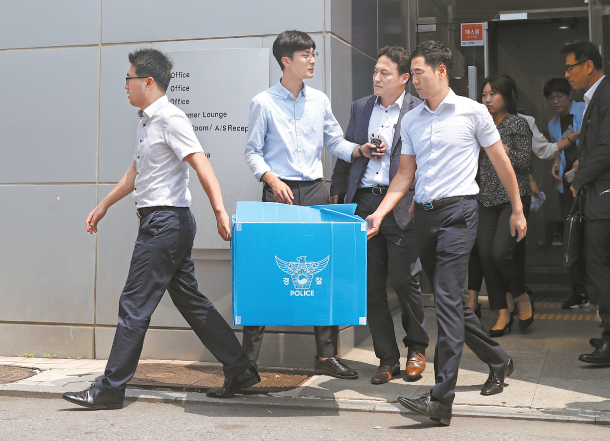 A special investigation team from the National Police Agency walks out of a management office in Hannam-dong, Yongsan District, central Seoul, close to the residences of Samsung Electronics Chairman Lee Kun-hee and his relatives Monday over the suspected transfer of corporate money to their remodeling expenses. Police were searching for documents relating to allegations that Samsung Group paid a house interior firm from accounts created under borrowed names without issuing tax receipts from October 2008 to March 2015. Separately, a special prosecutor recommended a 12-year sentence for Samsung heir Lee Jae-yong for various corruption charges the same day. [YONHAP]

A special prosecutor recommended on Monday that a local court give Samsung heir Lee Jae-yong 12 years in prison for various corruption charges, including offering bribes to former President Park Geun-hye for political favors while she was in office.

Independent counsel Park Young-soo, who prosecuted Lee and four other Samsung officials over the abuse of power and bribery scandal involving Park, her longtime friend and Samsung Group, said Lee, who has denied all charges, should face justice for the sake of “national dignity.”

The Seoul Central District Court said it will announce its verdict and sentencing on Aug. 25.

“The defendants committed a classic example of corruption,” the independent counsel said in his closing argument, “based on cozy ties between politicians and businessmen .?.?. [and] seriously undermined the constitutional values of popular sovereignty and economic democracy.”

Lee and four former Samsung executives were indicted in February on charges of offering or promising 43.3 billion won ($38.4 million) in bribes to Park through her confidante, Choi Soon-sil, in return for political favors. They were accused of seeking government support for a merger of two Samsung affiliates in 2015, which helped Lee cement control over Samsung Group. Park was accused of pressuring the state-run National Pension Service to exercise its crucial voting right to support the merger.

In addition to bribery, Lee was accused of embezzlement, illegal transfer of assets abroad and perjury at a National Assembly hearing. When Lee took the stand on Monday for a final statement, he shed tears. “It is all my fault,” he said, but stressed that he never sought favors from Park.

He also denied that he incurred an enormous loss to the pension fund for his private gain. “I may be a fool, but I would never damage and show greed over the pension fund,” Lee said. “That is a serious misunderstanding.”

Independent counsel Park said he decided to seek a heavy punishment against Lee because the tycoon denied all charges and passed the buck to other Samsung executives, although he is the direct beneficiary of the crimes and the highest decision-maker. Park also reminded the court that business magnates no longer receive leniency in criminal trials and asked for a stern judgment.

Park said the charge alone of hiding assets overseas is punishable by a minimum of 10 years imprisonment, and that was why he decided to seek 12 years for Lee.

The independent counsel team has argued Lee and the Samsung executives paid the bribes by embezzling corporate money and hiding it in Germany. Samsung’s contributions to two cultural and sports foundations, which Choi practically controlled, and generous sponsorship for the equestrian training of Choi’s daughter, Chung Yoo-ra, were seen by special prosecutors as bribes.

The independent counsel indicted Lee and the four executives on Feb. 28. A preliminary hearing started on March 9, and the trial formally began on April 7. A total of 52 hearings took place and 59 witnesses testified. Former President Park was summoned three times, but never showed up.

The independent counsel also sought heavy punishments for the former Samsung executives. Ten-year sentences were sought each for Choi Gee-sung, Chang Choong-ki and Park San-jin. A seven-year sentence was sought for Hwang Sung-soo.

Throughout the trial, Lee and the other Samsung leaders denied that they bribed Park and their lawyers argued Samsung was extorted. They also said Lee was already the leader of Samsung Group after his father became ill, so there was no need for favors.

“The attitudes of the defendants shown throughout the trial made me wonder if Samsung Group, whose value accounts for 18 percent of the gross domestic product of Korea, has any intention to honor the country and the people,” Independent counsel Park said. “Instead, I came to suspect the conglomerate was just serving its owner.”

Lee’s lawyer, Song Wu-cheol, then gave a closing argument to refute the charges. He said the independent counsel is making unreasonable arguments based on circumstantial evidence and failed to prove the charges beyond reasonable doubt.

He also said Samsung did not need a succession process, though the independent counsel said it was the centerpiece of the bribery charge. “Samsung’s sponsorship for Chung’s equestrian training was an outcome of extortion,” he said. “Never a bribe.”

Song said the court must be fair, asking the judges to rule on the case based on the presumption of innocence. “I had great difficulty proving the defendants innocent because society already ruled them guilty,” Song said. “I have never doubted their innocence for a second. I ask the court to acquit them of all charges.”

Following the closing arguments, the court’s three judges said they will deliberate and announce the verdict and sentencing at 2:30 p.m. on Aug. 25. Lee’s detention warrant will expire on Aug. 27.