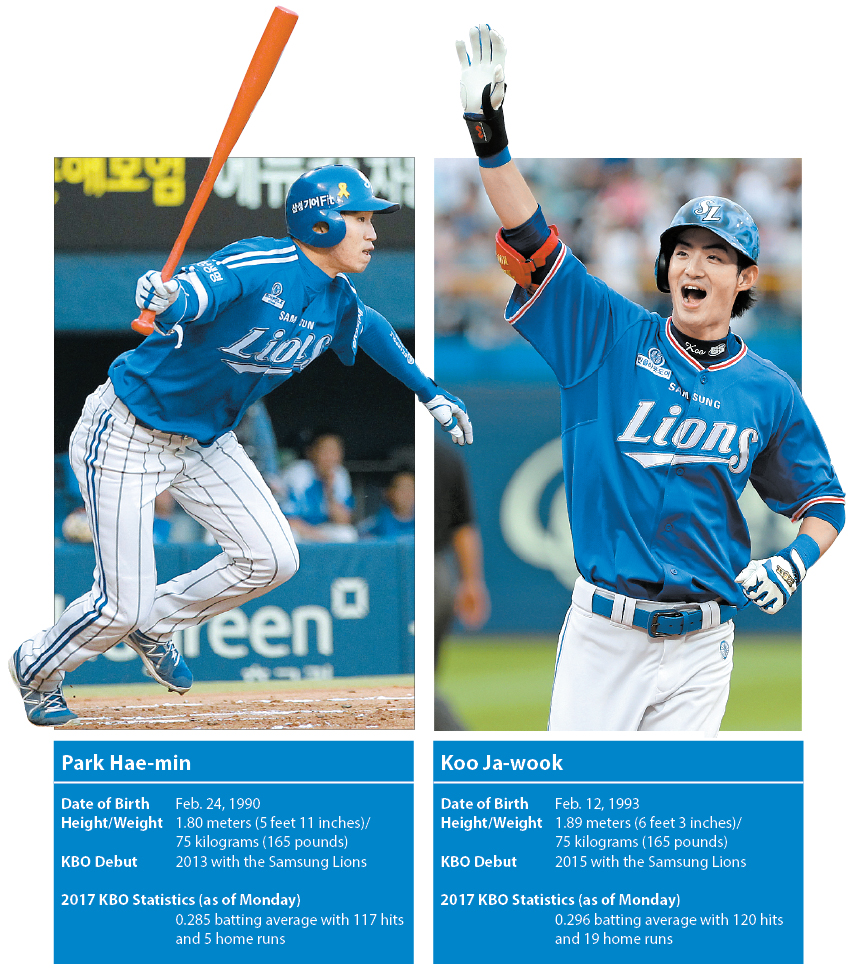 Park Hae-min and Koo Ja-wook of the Samsung Lions had one big goal for the season - to play in every single game of the regular season. Though there’s no reward for playing an unbroken season, among players there is a lot of pride attached to staying in shape and on form well enough to remain a permanent fixture in the roster.

Aside from Park and Koo, there are three other players in the KBO that still have a shot at perfect attendance this season; Lee Jung-hoo of the Nexen Heroes, Son Ah-seop of the Lotte Giants and Kim Jae-hwan of the Doosan Bears.

For Park, this season is a return to form. In 2015 he managed a perfect season and played in all 144 games. Last year Park missed three games due to a back injury, so only managed 141 games. He has played in 510 games since the start of the 2014 season, more than any other KBO player.

After Park, Na Sung-bum of the NC Dinos has played in a total of 494 games, more than ten games less than Park. Park’s achievement is especially impressive considering that KBO teams often play six games a week.

As well as appearing in so many games, Park’s on-base record makes is also impressive.

Utilizing Park’s fast feet and wide offense range, he runs more than others. There’s not a single day where Park finishes a game without a minor injury from sliding to a base. And since he is the Lions’ first batter, he is given more opportunity in the batters’ box and running the bases. With that, Park leads the KBO in stolen bases at 32 as of Monday, well on track to defend the category for his third consecutive seasons.

Park’s desire to play in games is stronger than others, as he joined the KBO in 2012 as an undrafted free agent by the Lions.

“I would watch baseball games after training and tried to figure out a way to play in the KBO,” Park said. “And the first thing I thought of was to make my uniform number be two digits, which means a registered player. Still, I play with the goal of playing in all the games because you need to play well for the manager to include your name on the starting roster.”

Park’s analysis is accurate. He has become such a consistent player in both offense and defense that he has confidently secured his slot in the Lions’ lineup.

Along with Park, Koo also hopes to play in all the games this season for the first time since his KBO debut in 2015. Unlike Park, who occasionally came on as a substitute, Koo was included in the starting lineup for all 105 games so far this season. The Bears’ Kim is the only other player in the league that has achieved this.

Koo, considered by many fans to be the successor to Lee Seung-yuop, the infamous Lion King, has made some changes to his game this season. Koo has always shown accuracy in his batting, but this season he is favoring home runs over surgical precision. As of Monday, Koo is only one short of 20 home runs this season, and is tied for first with Choi Hyung-woo of the Kia Tigers for two-base hits, with 29.

Koo initially found it difficult to handle the physical challenges of being called up for every game this season. Rather than complaining about playing too much, he started taking better care of himself and still hopes to become the leading player behind every win for the Lions.

“I give myself greater meaning in playing full-time,” Koo said. “Until the end of the season, I want to appear in all the games. Though it is difficult physically, I believe that if there aren’t any injuries it is a player’s duty to play in all the games.”