Korean sprinter Kim Kuk-young lamented his performance on Monday in the 100-meter semifinals at the ongoing world championships, saying he should have at least run faster than the two Asian competitors in the same heat. 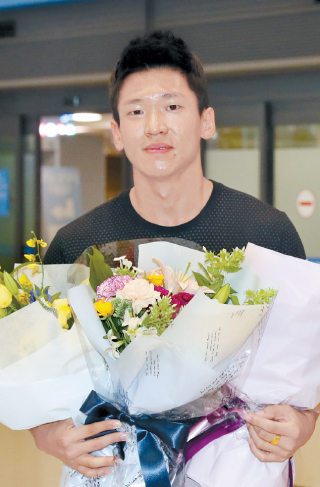 Kim became the first Korean to ever reach the 100m semifinals at the International Association of Athletics Federations (IAAF) World Championships in London last Friday (local time) with a time of 10.25 seconds. He, however, finished last among eight runners in his semifinal heat on Saturday after clocking 10.40 seconds.

The 26-year-old, who owns the Korean national record of 10.07 seconds, said he should have at least beaten Aska Cambridge of Japan and Xie Zhenye of China, who both ran in the same semifinal heat. Cambridge finished sixth with a time of 10.25, while Xie was seventh after completing his race 0.03 seconds later.

“When I saw that my name was in the group with Chinese and Japanese athletes, I really wanted to win those two runners in the race,” he told reporters after arriving at Incheon International Airport. “However, I lost to them, and that’s why I do have some regrets.”

Kim said his body wasn’t perfectly fit for the semifinal as he felt some pain in his lower back after his qualifying heat.

“I really didn’t want to say this, but my body didn’t feel good after the qualifying heat,” he said. “The next day, I couldn’t even move my lower back comfortably.”

Kim, however, said he gained valuable experience from the worlds.

“It’s still my fault that I couldn’t take good care of myself at the major event,” he said. “At the 2015 worlds and the 2016 Rio de Janeiro Olympics, I just came back home after one race as I failed to pass the qualifying heat. But this time, I ran twice and I learned many things again.”

Kim said the semifinal atmosphere is different than the qualifying as world’s top sprinters get serious. In both qualifying and semifinal heats, Kim ran with Justin Gatlin of the United States, who eventually won the 100m dash after beating his compatriot Christian Coleman and Jamaican legend Usain Bolt.

“In the qualifying, it felt like a festival, but in the semifinal, the world’s top athletes were serious about the race maybe because they were aware about the final,” he said. “I didn’t know about this.”

Su Bingtian was the only Asian sprinter in the 100m final and he is likely to be the top favorite at the 2018 Asian Games in Jakarta. The 27-year-old Chinese is the only man of Asian descent to mark sub-10 seconds in 100m with a time of 9.99 seconds.

Kim said he will work hard to win a medal at the Asian Games while becoming the first Korean to break the 10-second mark in the 100m.

“In order to become the top Asian sprinter, you have to race consistently like Su Bingtian,” he said. “I also feel that the Asian track and field sport is developing when I see young Japanese athletes and I know I have to compete against them. I’ll try to break down my problems in London and prepare for the Asian Games.”