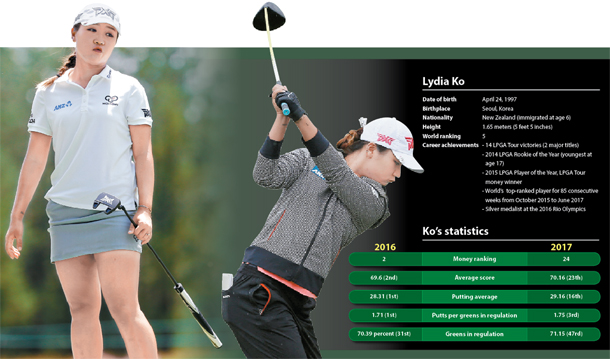 She once burned fast and bright, but this season, star golfer Lydia Ko seems to be flaming out.

The wunderkind Korean-New Zealander who made her professional debut in the LPGA Tour at the ripe age of 17 has been struggling to catch a win this year. In her past six tournaments, Ko has failed to finish in the top 10, and at the Ricoh Women’s British Open over the weekend, she barely made the cut, finishing tied for 59th at two under par. Earlier at the Aberdeen Asset Management Ladies Scottish Open, Ko missed the cut entirely.

It’s a stark turnaround for the 20-year-old golfer, who debuted on the professional stage with much promise. When Ko entered the LPGA Tour in 2013, all the pundits thought she could be the greatest golfer in history. She was already famous in the world of golf, winning the Canadian Women’s Open as an amateur two years straight in 2012 and 2013. Despite the age limit for going professional - 18 - the LPGA gave Ko a pass to join the tour at 17.

During her rookie season in 2014, she won the Swinging Skirts LPGA Classic, becoming the youngest professional golfer to win an LPGA tournament.

This season though, she has failed to secure a single title. Ariya Jutanugarn of Thailand took the No. 1 spot from Ko in June and held it for a week before it was taken by Ryu So-yeon. Ko has dropped to fifth, behind Lexi Thompson of the United Sates and her compatriot Park Sung-hyun.

Ko’s biggest problem is considered to be her putting. Up until the British Open, her putting average was 29.16, ranked 16th on the LPGA Tour. Though it is not too bad of a statistic generally speaking, it’s a significant drop for Ko compared to last year, when she was ranked first in putting.

The golfer’s troubles appear to have started last year after her 20th birthday. In October 2016, Ko parted with Jason Hamilton, the caddie who led her to 13 LPGA wins. Shortly after in February 2017, Ko also decided leave David Leadbetter, the swing coach who helped her win 15 titles, for Gary Gilchrist. Her main sponsor also changed, from Callaway to PXG, resulting in a whole new set of equipment. Pundits quipped that Ko appeared to have changed “everything but her name,” and so far, she hasn’t benefited from any of the changes.

“Recently, Ko seems to have lost confidence in her game,” said Im Kyung-bin, a commentator at cable channel JTBC Golf, “and this has affected her mental game.”

With so many adjustments, it will be hard for Ko to identify and fix her problems. Ko herself believes she needs to be patient adjusting to her new swing.

“I don’t feel like it’s a lot off,” Ko was quoted as saying on the LPGA website. “I’ve just been struggling where I couldn’t; the puzzles are there, but it’s been hard to put all those pieces together, and sometimes that is the hardest thing.”

Even the best have experienced slumps when changing their swing. Tiger Woods went through a title drought for two seasons when he modified his swing in 2010 and 2011, but afterward, Woods emerged a new golfer, winning three tournaments in 2012 and five in 2013.

Just like Woods, pundits say, Ko needs more time to adjust, since she has to get used to more than just a new swing.

“It hasn’t even been a year since Lydia Ko made her changes, so you can’t expect them to help her right away,” Im said. “It’ll take time for her body to adjust to the changes.”