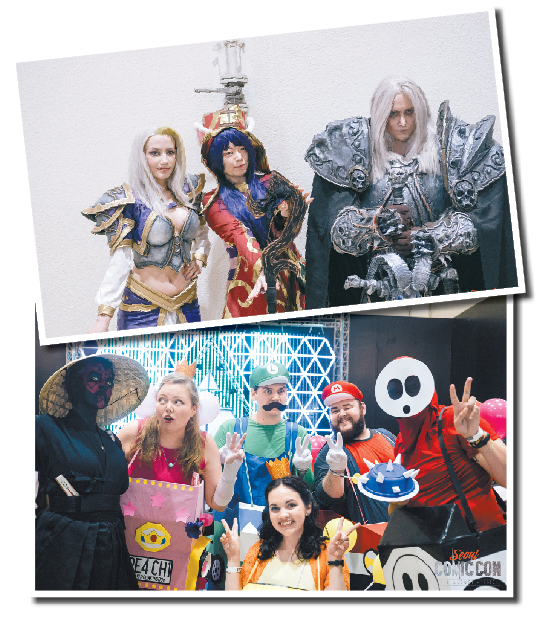 The international pop culture extravaganza known as Comic Con is the perfect place for fans of all kinds to geek out.

Excited for the first Comic Con to ever be held in Korea, hard-working fanatics donned all sorts of costumes and made their way towards Coex in southern Seoul over the weekend.

Just like any other Comic Cons held elsewhere in the world, the festival in Korea, hosted by ReedPop, filled up the 11,000-square meter (118,403 square feet) convention center with a massive variety of content related to movies, television, comics, animation, games and toys.

The event drew fans of all sorts - from large groups of high school students to mothers pushing kids in strollers and avid comic book collectors.

Though mostly foreigners, a number of people dressed in costume as some of their favorite characters attended the event. A female Captain America in hanbok (Korean traditional clothing), Jay-G from Kakao Friends, and Junkrat and D.Va from popular computer game Overwatch proudly strutted around the convention hall, eagerly stopping to take photos with people waiting in line to meet them, and exchanging friendly glances with fellow cosplayers.

Some fervent cosplayers, who paid extra for the three-day passes, were spotted wearing different costumes each day. 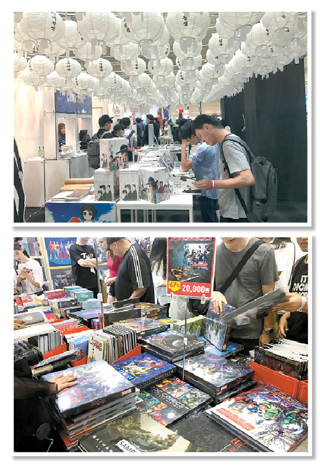 Top: Comic Con participants peruse books while others queue up to try out a game adapted from the popular webtoon “With God.” Above: People sift through comic books on sale at one of the event’s many booths.[JIN MIN-JI]

One of the most anticipated events of the weekend was the Korea Championships of Cosplay. The winner, one of the two people dressed as Iron Man for the competition, impressed the audience with his red suit and glowing hands, took home the 1 million won ($890) prize, and qualified to compete at the 2018 Crown Championships of Cosplay, slated to take place at the Chicago Comic and Entertainment Expo next year.

A live talk with cartoonist Joo Ho-min, best known for the webtoon “With God,” was another popular event. “With God” is being adapted into a movie, scheduled to hit theaters in December. It has also been made into a game, which was introduced at Comic Con.

Though the event was well attended, there are a number of improvements it will need to make to continue attracting fans in the future.

The festival’s unstable smartphone application, which was supposed to provide information about booths and the festival’s schedule, was frustrating for participants, along with the sudden cancellation of Kim Jung-gi’s scheduled live drawing events only 10 minutes before it was set to begin.

Besides the disorganization, one of the biggest complaints fans expressed was regarding the weak lineup. Comic Con is usually a venue for fans to see celebrities, both high profile and obscure. But the lineup for the Seoul’s edition was not enough to meet the expectations of the superfans in attendance.

“There are more small-scale artists [at Comic Con Seoul], which is nice. But I’d like to see some of the bigger artists,” said 25-year-old Andrew Histed of the United States, who has been to Comic Cons in San Diego and Japan.

He also expressed disappointment over the booths, saying, “[At other Comic Cons,] there are more people from actual companies like special effects firms, instead of [people] giving out gifts and selling goods.”

Histed’s friend Gavin Pierce, 20, who dressed up as Obi-Wan Kenobi from Star Wars, similarly expressed disappointment over the low turnout of celebrities. “From what I’ve seen, there are [usually lesser-known] actors walking around [the festival] and you get to actually meet them. So maybe next time, extra actors could come out here and interact with everyone.”

The fact that not many Koreans dressed up for the occasion also left some participants wanting more.

“I noticed that not many Koreans dressed up. I would love to see more people dressing up because part of the fun is seeing all of the wonderful costumes people come up with,” said 31-year-old Elizabeth Brak of the United States, who redesigned her blue hanbok into a Captain America costume for $400. “I hope this [costume] encourages people to think outside the box and do more costuming.”

Crowds gather to watch an event while a man dressed as a dinosaur passes by, a common sight at Comic Con Seoul. [COMIC CON SEOUL]

According to the few Korean cosplayers at the festival, the biggest obstacle Koreans face is the low number of costume shops in Korea.

But for passionate cosplayers who know where to get their costumes, Seoul’s first Comic Con was “heaven,” where serious cosplayers could exchange information on their costumes, according to a 19-year-old Korean cosplayer who wished to be unnamed.

“Those festivals that I usually go to like Comic World have strict regulations on cosplayers’ dress codes, such as barring women from revealing their shoulders. So compared to those festivals, Comic Con Seoul is like a heaven where cosplayers can freely run around and exchange information on their costumes.”

Seoul’s first Comic Con hopes to become an important venue for local entertainment content to spread in its forthcoming events.

“This year’s Comic Con may not have stood out from other pop culture events in Korea,” said Lee Ji-eun from Comic Con Seoul. “But as much as the brand value Comic Con has, we hope the event grows to function as a meaningful venue, where the value of local entertainment contents like movies and dramas can also get recognized.”

According to Lee, the second edition of the festival will take place next summer, hopefully with a bigger lineup and in a bigger location.