Oil: A blessing and a curse

Oil: A blessing and a curse 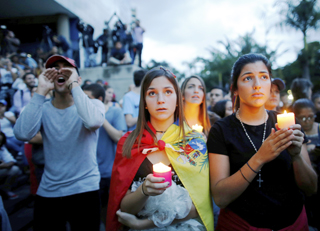 Venezuela is stuck with the resource curse. It has the world’s largest oil reserves and is the fifth-largest exporter of oil, but the South American country is going through an economic crisis after oil prices dropped from $120 per barrel in 2014 to about $50. Consumer prices are expected to rise sevenfold this year and up to 20 times next year. An extensive food shortage caused seven out of 10 Venezuelans to lose an average 9 kilograms (20 pounds) in weight last year.

They call it the “Maduro diet” after the Venezuelan president, but politicians couldn’t care less. President Nicholas Maduro has dissolved the opposition-dominated National Assembly and formed a pro-administration National Constitutional Assembly. He has military forces surround the office of the attorney general, who opposes his rule. Some predict Venezuela might be the first petroleum-producing country to go bankrupt.

The concept of the resource curse comes from the Dutch. In 1959, vast natural gas fields were discovered in the North Sea near the Netherlands. For decades, tens of billions of dollars in foreign currency flowed into the country. The value of the Dutch guilder rose dramatically, the competitiveness of exporters outside natural gas was undermined, prices went up and unions walked out to demand a wage increase. The extreme social unrest and reluctance of investors resulted in a serious economic slump. The Dutch’s abundant resources ended up hurting the economy.

But resources are not necessarily a curse. For many countries, they’re a blessing. Norway operates the world’s largest sovereign wealth fund, GPFG, which has over $900 billion. The money is to be used for future generations after the country’s oil supply runs out. It mostly acquires overseas assets to stabilize its currency value.

Botswana, a landlocked country in southern Africa, has also wisely used income from its diamond mines, the third largest in the world, for modernization. It stands in contrast to neighbors that have waged civil wars over income from natural resources. As a result, Botswana is an emerging economy with GDP per capita of $16,000 and has maintained an average annual growth rate of 9 percent since the country’s independence in 1966.

Natural resources themselves are neither good nor bad. It just depends on how countries and their leaders use them. More important than resources are the will and awareness of citizens. It seems I am fortunate to be born in the Republic of Korea and not oil-rich Venezuela.