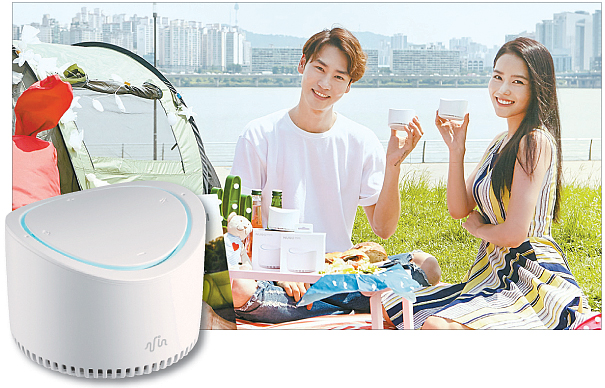 Models with SK Telecom’s portable Nugu mini speaker by the Han River in Seoul on Tuesday. On the left is an image of the new device. [SK TELECOM]

SK Telecom unveiled a portable version of its voice-activated speaker Nugu on Thursday.

The so-called Nugu mini is cheaper and lighter than its existing counterpart. It comes with an internal battery that lasts four hours on one charge, making it suitable for outdoor use.

Nugu is SK Telecom’s answer to Amazon’s Echo and Google Home. The speaker is equipped with artificial intelligence technology that can respond to human voice and perform functions like playing music and answering general knowledge questions. SK Telecom, Korea’s largest telecom company, released the original Nugu speaker last September and said it has since sold 150,000 speakers.

Unlike the original Nugu, the Nugu mini does not need to be plugged into a socket and weighs 219 grams (8 ounces), about a fifth of the original Nugu. It will retail for 99,000 won ($88), which is 50,000 won cheaper than its predecessor.

“Customers in an internal survey said they wanted the speaker device to be more cost-efficient and easier to move around,” SK Telecom said in a statement. “Except for the fact that the Nugu mini has limited volume, all functions available on the larger Nugu are also in the smaller device.”

In response to concerns that the Nugu and Nugu mini might compete with each other, the company said its priority was on expanding the user base of its AI services rather than earning revenue from device sales.

“We think of our voice-powered speakers as tools to expand our overall AI service platform,” said Park Myung-soon, senior vice president of SK Telecom’s AI business office. “Our ultimate goal is to make a larger user base for our AI engine by offering it through a range of devices.”

SK Telecom’s Nugu refers not only to the voice-activated speaker but also the AI software and cloud server that stores data collected from the speaker. More data such as human voices and words means better voice recognition and AI service quality, the company said.

“Based on a larger user base, we can come up with many more AI services that can serve the needs of people’s everyday lives and also build new business models with paid services,” Park said.

The company signed a partnership with KB Kookmin Bank and KEB Hana Bank to offer finance-related services on Nugu. Customers of both banks can ask the speaker for information like currency exchange rates and products offered by the banks.

For KB Kookmin Bank users, Nugu can also tell them how many people are queuing at nearby branches and even reserve a queue ticket prior to physically arriving at the bank.

SK Telecom has also teamed up with local audiobook maker Audien to offer discounts on the monthly service for Nugu users.

Other new services include a Korean-English dictionary and theater information service. An upgraded “casual conversation” feature lets Nugu recommend songs or play quiz games with users when they tell the speaker they are “bored.”

In the second half of the year, SK Telecom plans to link Nugu with its navigation app T-Map so that the device can also be used in cars. In the longer term, the mobile carrier is planning to embed its AI engine into other devices like set-top-boxes of the company’s IPTV service affiliate SK Broadband and even mobile phones.