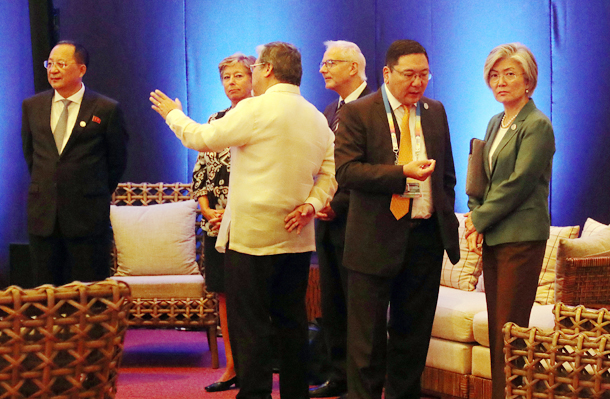 North Korea’s foreign affairs minister declared Monday at a regional security forum in Manila that his country will not negotiate its nuclear and ballistic missile programs unless the United States scraps its hostile policy against the regime.

“We will, under no circumstances, put the nukes and ballistic rockets on the negotiating table,” Ri Yong-ho said in his remarks during a meeting in the 50th Association of Southeast Asian Nations (Asean) Regional Forum (ARF), according to transcripts released by his spokesman and reported by Yonhap, “neither shall we flinch an inch from the road to strengthening our nuclear forces unless the hostile policy and nuclear threats of the United States are eliminated.”

On the newly passed UN Security Council resolution, Ri threatened to “respond with strong follow-up measures” against the United States, adding that North Korea is prepared to teach the country a “severe lesson” with its nuclear arsenal.

He added that North Korea is a “responsible” country that wouldn’t attack any other government unless they join Washington’s military action against the regime. Ri also took time to accuse Seoul and Tokyo of “kowtowing blindly” to the United States, suggesting the two countries were on its watch list.

Ri’s statements came shortly after U.S. Secretary of State Rex Tillerson told reporters in Manila on Monday that Washington was still open to talks with Pyongyang as long as the regime refrains from any additional missile testing.

“The best signal that North Korea could give us that they’re prepared to talk would be to stop these missile launches,” Tillerson said, according to transcripts released by the State Department. But Tillerson did not give a timeline. “We’ll know it when we see it. We’re not going to give someone a specific number of days or weeks. This is really about the spirit of these talks, and they can demonstrate they’re ready to sit with a spirit of finding a way forward in these talks by no longer conducting missile tests.”

It’s all about “how we see their attitude towards approaching a dialogue” with us, he stressed.

But Kang also took time to reiterate Seoul’s dialogue proposition to Pyongyang, asking the country to respond to its request to hold military talks and discussions for family reunions. North Korea has not given any response to either offer, both of which were relayed on July 17.

In a separate bilateral meeting with Tokyo, Kang and her Japanese counterpart Taro Kono agreed on Monday to boost cooperation against North Korea military threats and use “all possible measures” to guide the North towards denuclearization.

Regarding the contentious “comfort women” issue, which refers to Korean women forced to work as sexual slaves for the Japanese Imperial Army during World War II, Kang was quoted by her ministry as telling Kono that most of the South Korean public did not accept the bilateral deal signed in 2015, and so the South Korean government launched a task force to look into the agreement.

The two sides have been at odds since President Moon Jae-in was elected in a May snap election, replacing Park Geun-hye, whose administration signed the deal in December 2015.

The “final and irreversible” deal was intended to resolve the wartime sexual slavery issue through an apology issued by the Japanese government and a 1 billion yen ($9 million) fund for the victims.

But Moon’s government has questioned the agreement’s transparency, vowing to review how the deal was done.

When asked by reporters about her greatest achievement in the ARF during a press conference Tuesday, Kang replied that she gained support from foreign governments on Moon’s Berlin peace vision, adding that the support will add momentum to Seoul’s effort to herald peace on the peninsula.

Moon’s inter-Korean peace vision, described in a speech on July 6 at the Koerber Foundation in Berlin during his trip to Germany for a Group of 20 summit, included easing military tensions at the inter-Korean border, a reunion of families separated by the 1950-53 Korean War, North Korea’s participation in the 2018 PyeongChang Winter Olympics and inter-Korean dialogue.