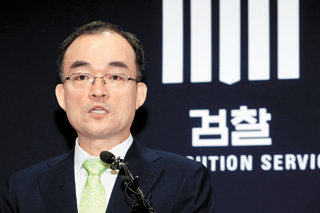 The country’s top prosecutor issued Tuesday the first-ever apology for abusive and unlawful investigations of political cases under the authoritarian regimes and vowed to improve transparency of the criminal justice system.

Prosecutor General Moon Moo-il made the unprecedented apology in a meeting with reporters. “Under authoritarian governments in the past, the prosecution failed to respect due process and human rights during its probes of some political cases,” Moon said. “I offer a sincere apology to the public.”

Moon named some particular cases that were especially egregious. He singled out the People’s Revolutionary Party, which the Park Chung Hee administration cracked down on in 1975 for supporting socialism. Eight people were convicted of attempting to restart the party with the aim of overthrowing the government on April 8, 1975. Only 18 hours after the death sentences were announced, the government executed the prisoners. In December 2005, the judiciary accepted an appeal for a posthumous retrial, and acquittals were made in 2007.

He also apologized for the case of Kang Ki-hoon, a former student activist wrongfully accused and convicted of assisting a fellow activist’s suicide and ghostwriting his suicide note. Kang was released in 1994 after serving three years in prison and demanded a retrial. The Supreme Court granted his wish in 2012 and Kang was finally cleared in 2015.

“I want to apologize to the victims and their families whenever I have an opportunity,” Moon said. “I will also allow the public larger access to the records of wrongful investigations after internal reviews.”

Moon said he wants to reform the prosecution to be more just, transparent and accessible. “The people’s perception of human rights has improved significantly, but the prosecution failed to improve its authoritarian attitudes,” Moon said.

Outside experts will be invited to join an investigation review committee to discuss the legitimacy of a probe and subsequent indictment for high-profile cases, Moon said.

Moon also said an internal reform committee will be launched with outside experts. A task force will be created inside the prosecution to back the committee and implement its recommendations. The committee will discuss various plans to overhaul one of the country’s most powerful authorities. The prosecution is often criticized for high-handedness, corruption and abuse of power.

The top prosecutor, however, reacted lukewarmly to reporters’ questions if the state will reinvestigate the abuse of power and corruption scandal involving former President Park Geun-hye, her friend Choi Soon-sil and conglomerates. Speculation is running high that Choi’s abuse of power was deeper than what has been revealed and that prosecutors were under her influence. Because of the public distrust in the prosecution, an independent counsel probe took place earlier this year, but the special prosecutor had little time to delve into all areas of suspicions.

President Moon Jae-in mentioned the need for an additional probe when he named the dissident prosecutor Yoon Seok-youl to head the Seoul Central District Prosecutors Office. Both Park and Choi are currently standing trial.

“I always wondered why the prosecution was operated in this way, although it is not an intelligence agency,” Moon said. “And I conclude that a fundamental redesign is necessary. A new role will be assigned to the intelligence office.”

He, however, decided to keep the Supreme Public Prosecutors’ Office’s special investigation team, created in January 2016 to investigate high-profile corruption cases after the Central Investigation Unit was dismantled in 2013. Moon’s reorganization plan clearly indicted that he has no intention to surrender investigative power to the police. Redistributing investigative authority between police and prosecutors was one of President Moon Jae-in’s campaign pledges. A plan to strengthen police power, thus curbing prosecutorial authorities, is currently being discussed by the administration and the ruling party.