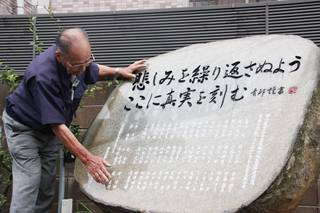 A man in Nagoya, Japan, mourns by a memorial stone dedicated to the victims of Japanese forced labor during World War II who perished in a 1944 earthquake. It reads, “we carve the truth here so as not to repeat such sorrow.” [YONHAP]

A Korean court ruled Tuesday in favor of victims of Japanese forced labor during World War II, ordering the Japanese firm Mitsubishi Heavy Industries to pay compensation to an elderly surviving victim and a family member of a deceased victim.

The Gwangju District Court ruled that the Japanese company must pay 120 million won ($106,572) in compensation to Kim Young-ok, 85, and 3.25 million won to a family member of late victim Choe Jeong-rye for their toiling labor.

The plaintiffs had demanded Mitsubishi pay 150 million won and 30 million won, respectively, claiming the victims worked without pay at an aircraft manufacturing plant in Japan’s Nagoya after being deceived in 1944 with a false promise they would be able to make money and study if they agreed to go to Japan. It was when Korea was under Japan’s harsh colonial rule from 1910-1945.

“It is difficult to see that individual rights to damages are included in the Korea-Japan reparations treaty,” the court said, referring to the 1965 agreement between Seoul and Tokyo on resolving colonial-era issues. Japan has claimed that all colonial-era issues, including individual compensation, were resolved with the treaty.

“In cooperation with the Japanese government, Mitsubishi Heavy Industries forced young women to toil under dangerous and poor working conditions without giving pay,” the court said in the verdict. “The plaintiffs [the victims] either lost their lives or sustained severe burns and lived concerned about being mistaken for military comfort women.”

The court said that the amount of compensation for Choe’s family member, who is an in-law of the victim, was determined according to the relative’s inheritance share based on the total compensation (150 million won) the victim was supposed to receive.

Mitsubishi is expected to appeal the ruling. Mitsubishi is one of the best known Japanese firms involved in forced labor during World War II. The company is featured in the just-released Korean film, “The Battleship Island,” which tells the story of hundreds of Korean forced laborers who risk their lives to escape Hashima Island.

Tuesday’s ruling is the first such case since President Moon Jae-in took office in May. It is one of a total of 14 such cases that Korean victims have filed against Mitsubishi and other Japanese firms over forced labor.

The same court is also scheduled to hand down a verdict in a similar case Friday. Three surviving victims and one bereaved family member filed the suit in 2014, demanding Mitsubishi pay them a total of 600 million won. It took 3 1/2 years for the court to deliver its first verdict. The plaintiffs have accused the Japanese firm of dragging its feet.