Bae Sang-moon is ready to return to the course

Bae Sang-moon is ready to return to the course

Ahead of his discharge from the Korean military, PGA Tour golfer Bae Sang-moon said Tuesday his time in the armed forces has made him stronger physically and mentally. 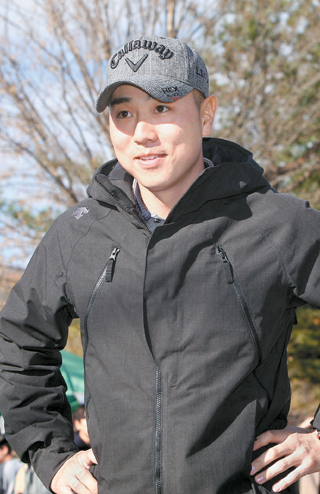 Bae Sang-moon poses for a photo before entering Army training in November 2015. Bae will be discharged on August 16. [YONHAP]

The two-time PGA Tour winner will complete his mandatory service on Aug. 16. His agency, All That Sports, announced last week that Bae’s first event will be the Shinhan Donghae Open on the Korean Tour starting on Sept. 14.

In a statement released Tuesday by All That Sports, Bae said he is coming back to competitive golf a tougher man.

“I’ve had such great memories serving in the military, and I feel that I’ve grown a lot stronger,” Bae said. “Now that I think about it, I am glad I’ve done the military service. I wish I would have done this sooner.”

Bae, 31, began his military service - mandatory for healthy Korean men between the ages of 18 and 35 - in November 2015 amid much controversy. Earlier that year, Bae lost a legal battle against the local military manpower agency over the extension of his overseas travel permit.

Bae wanted to extend his visa, which had expired at the end of 2014, so that he could continue playing in the United States.

As a rifleman in an Army infantry unit, Bae said his duty “had nothing to do with golf” but it was still a great learning experience.

“I did a lot of weight lifting and running to improve my conditioning, and I am not concerned about my fitness level at all,” he said. “Even though I didn’t get to play much, I grew to love golf even more.”

Bae said he only played when he was on leave. Those off-field workouts in the military have helped ease nagging back and hip pain, and the subsequent weight loss has improved his swing speed.

“I played with some close friends on the [Korean] pro tour, so that I could stay sharp,” Bae said. “There were days when I played as well as I did on the PGA Tour. I don’t think my time away will have much of a negative impact on my career. I believe I’ll play even better than before.”

Bae won the HP Byron Nelson Championship in 2013 and Frys.com Open in 2014. He is one of five Koreans to win on the PGA Tour.

The PGA Tour has allowed Bae to retain his membership during his military service. He’s scheduled to rejoin the tour in October at the start of the 2017-18 season.

Bae said he put in a lot of hours doing mental training, and he feels he will have “a vastly different attitude on the course.”