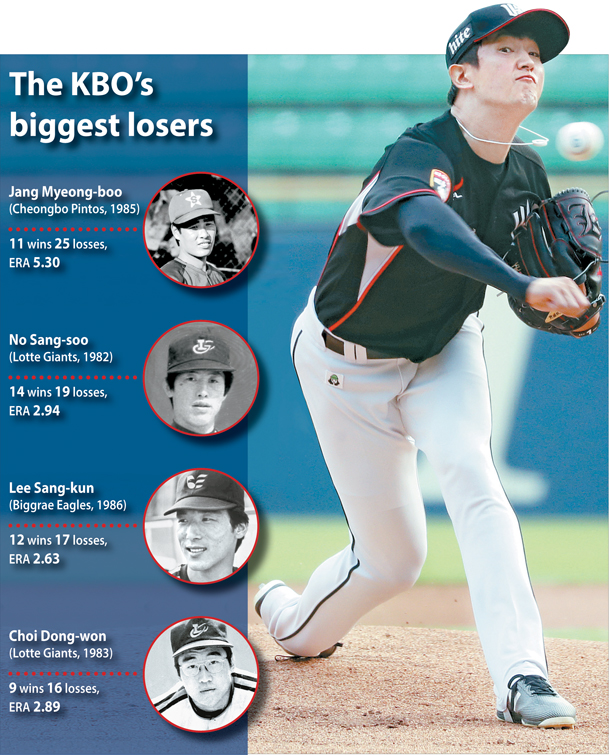 Ko Young-pyo, starting pitcher for the KT Wiz, pitches during a game against the LG Twins on July 19. [YONHAP]

Although the number of losses is a good way to judge a team’s performance, for a pitcher it can be a little more complicated. While pitchers are often judged on their win-loss record, this is not always representative of their potential.

The KT Wiz’s starting pitcher Ko Young-pyo has recorded 11 losses this season, more than any other pitcher in the Korea Baseball Organization (KBO) except for his own teammate, Don Roach. Ko has played in 21 games so far this season, winning five, and has pitched 122 innings. This is the first time since his debut in 2015 that Ko has pitched more than 100 innings.

Despite his 11 losses, Ko has managed to keep his name in the starting rotation, showing that win or lose, he has become a pitcher that the team trusts.

Surprisingly, many of baseball’s greatest pitchers recorded the most losses at some point in their career.

In 1985, Jang Myeong-boo of the Cheongbo Pintos, a now defunct KBO team, recorded 25 losses in a single season. At the time there wasn’t any difference between starting pitchers and relief pitchers, so Jang’s record is unlikely to ever be broken.

Though Jang’s name went down in baseball history for his record losses in 1985, it was just two years earlier in 1983 that he dominated on the mound, picking up a total of 30 wins. Unfortunately Jang also recorded 16 losses in 1983 due to his team’s weak performance. Jang’s record makes it a lot more surprising when compared to Dustin Nippert’s record in 2016, where he won the KBO’s MVP award with 22 wins six losses, recording 2.95 ERA.

In 1984 Jang moved to the Sammi Superstars and recorded another 20 losses. Despite Jang’s unfortunate tendency to frequently lose games, he still got some results - he was responsible for more than a quarter of the wins recorded by teams he played for throughout his career.

After Jang, No Sang-soo of the Lotte Giants has recorded the second-highest number of losses in a single season in KBO history. No recorded 20 losses in the 1982 but still managed to keep his ERA at 2.94, only 0.01 lower than Nippert’s ERA in the 2016 season. Lee Sang-kun, currently the interim manager for the Hanwha Eagles, was another unfortunate pitcher in the 1986 season. Lee, the second pitcher in Hanwha’s rotation at the time, ended the season with an ERA of 2.63 despite picking up 17 losses.

Choi Dong-won of the Lotte Giants picked up 16 losses in the 1983 season but still maintained an ERA of 2.89. Just one year later Choi picked up 27 wins and let the Giants to win the Korean Series.

In 1995, Koo Dae-sung of the Eagles and Chung Min-tae of the Pacific Dolphins both recorded 14 losses. Just one year later in 1996 they went on to record 18 and 15 wins, respectively. Koo was even selected as the KBO regular season MVP.

The Kia Tigers’ Yoon Suk-min is one of the most unfortunate pitchers in recent years. In 2007 Yoon had an ERA of 3.78, but picked up 18 losses throughout the season. Yoon has since proven his reliability as a pitcher and still holds his place on both Kia’s roster and the Korean national team.

Although Ko may go on to record more losses this season, this doesn’t necessarily make him the worst pitcher in the league. As history has proven, sometimes even the best pitchers record a terrible season.