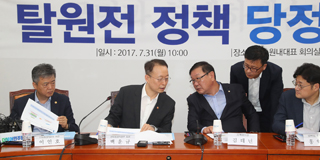 Democratic Party’s Policy Committee Chairman Kim Tae-nyeon, third from left, talks with Minister of Trade, Industry and Energy Paik Un-gyu, second from left, at a consultative meeting on July 31 between the ruling party and the government to coordinate the Moon Jae-in administration’s energy policy to phase out nuclear power in favor of renewable energy. [YONHAP]

Renewable energy from solar and wind power are under a new — and hotter — spotlight since President Moon Jae-in announced a policy to phase out coal and nuclear fuel in April. Germany is cited as an exemplary model to follow. It has been pursuing an ambitious energy policy to bolster its share of renewable energy and phase out nuclear power since the 2011 Fukushima nuclear crisis in Japan.

Under the so-called “Energiewende [energy transition] policy,” Germany, which relied on 17 nuclear reactors for a quarter of its electricity in 2011, plans to completely phase out nuclear power by 2022. 40 to 45 percent of its electricity requirements are to be provided by renewable energy by 2024 and 55 to 60 percent by 2035. Proponents claim Korea can be successfully weaned off nuclear power, which is responsible for a third of its electricity if it follows Germany.

But Germany’s energy policy has been receiving mixed reviews. Many overseas media outlets have been warning other countries against blindly following Germany.

The biggest downside is the unreliability of energy supplies from solar and wind power. On sunny and windy days, renewables can handle 85 percent of power demand. But Mother Nature is not that predictable. Electricity runs short on foggy or windless days.

Because Germany decommissioned a great number of reactors, it had to hastily build thermal power plants in order to ensure sufficient reserves. The policy to promote clean energy has ended up adding thermal power generators running on fossil fuel. Carbon emissions, which had decreased, increased again from 2015.

A spike in electricity bills posed another headache. Renewable energy generators do not require much cost to maintain, but they are astronomically expensive to build. Germany spent 25 billion euros ($29.4 billion) last year on renewables, of which 2 billion euros were pulled out of its fiscal coffers, while the lion’s share of 23 billion euros was passed along to consumers in their power bills. As a result, electricity bills jumped more than 50 percent last year compared to 2007.

“Energy prosumers,” which refers to consumers whom also produce power for sale to the grid, also contributed to raising electricity prices. As consumers start selling excess power from their rooftop panels, there were unexpected consequences. Power companies suffered massive losses from reduced revenue, going bankrupt one after another, which pushed up electricity prices further.

Emulating Germany, therefore, could be highly risky. Korea is much smaller in land space with a higher population density. A thermal power plant or nuclear reactor takes up 0.6 square kilometers (148 acres) of space to generate 1 gigawatt of electricity. A solar power generator requires 44 square kilometers — about five times the Yeouido commercial district in Seoul — to produce that much energy. A windmill calls for more than four times as much space, or about 202 square kilometers.
Also, as it turns out, wind turbines kill thousands of birds every year in Germany,

Korea must sanely study whether solar and wind power are really suitable for our geographic environment and other conditions. Solar panels composed of toxic lead and copper also could add to environment pollution.

Renewables may be the answer in the long term. But we must not delude ourselves into thinking that we can replace nuclear power as rapidly as Germany. A better future can carry a big price tag.