Row over discounts on phone bills heats up

Row over discounts on phone bills heats up 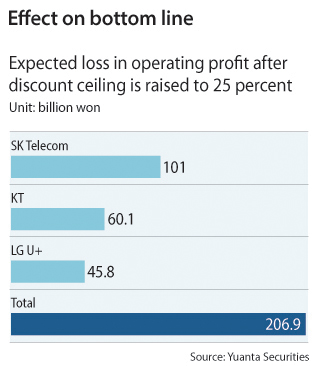 The battle between mobile carriers and the Moon Jae-in government over lowering people’s phone bills headed to a climax as the companies squawked Wednesday about a proposal to allow bigger discounts on monthly bills.

The nation’s three major mobile carriers - SK Telecom, KT and LG U+ - were requested by the Ministry of Science and ICT last month to submit position papers by Wednesday on raising the discount ceiling on monthly phone bills for long-term plans from 20 percent to 25 percent.

In the local telecom market, customers can either choose to get lump-sum discounts when they buy phones or subscribe to one- or two-year phone plans and get up to 20 percent discounts on the monthly bills.

Daishin Securities estimates about 27 percent of smartphone users, or about 15 million people, are subscribed to the long-term plans.

According to sources in the telecom industry, the companies are arguing it is against the principles of the country’s administrative law to order companies to raise the discount ceiling again. That ceiling was raised from 12 percent to 20 percent in April 2015.

Another argument is that government shouldn’t intrude on private companies’ business decisions.

There’s also controversy over the 5 percentage point increase in the ceiling. While the existing administrative guideline on phone bills states the discount rate on monthly fees can be adjusted from the current discount rate in “an additional five percent range,” the ministry claims the guideline refers to 5 percentage points while companies argue it is 5 percent of the current 20 percent rate, which means the highest possible cap after adjustment is 21 percent.

Based on the reports submitted by the three telecom companies, the ministry is expected to announce its official administrative measure within this month. Mobile carriers may consider suing the government. The mobile carriers fear that their own shareholders may sue the managements for failing to protect the company from massive profit losses.

“Either way, it’s a burden for the company,” a spokesperson of one of the three carriers said.

“There are expectations that the government may not be able to implement the policies as originally drafted, and telecom companies may be able to delay them to at least the second half of 2018 by pursuing administrative litigation and court injunctions,” said Choi Nam-kon, an analyst from Yuanta Securities.

If an administrative litigation actually takes place, a lengthy struggle between the companies and the government is expected and customers may have to wait years to have their phone bills reduced.