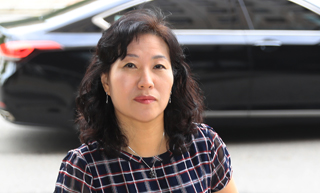 Park Ki-young, Blue House advisor for information science and technology in the Roh Moo-hyun administration, was appointed as head of the Office of Science and Technology Innovation by President Moon Jae-in. [YONHAP]

People used to call them the “four golden bats.” There’s nothing they couldn’t do. But one day, two of the four bats fell. One turned out to have fabricated a paper published in an internationally renowned journal. The other took responsibility for the incident.

It was Dr. Hwang Woo-suk, authority in stem cell research at the time, and Park Ki-young, Blue House secretary for information science and technology, who made Hwang a national figure. Park was also a co-author of Hwang’s paper. After the controversy, Hwang had to retire. The international science circle would not let a scholar with a history of fabrication re-enter the establishment. Park returned to teach at Sunchon National University.

The controversy did not end with Hwang and Park’s fall. Korea’s stem cell research fell behind the United States and China, and consequent reinforcement of the Life and Ethics Act restricted research by life scientists in Korea.

The world of science in Korea is stirred up as the Blue House appointed Professor Park to head the Office of Science and Technology Innovation under the Ministry of Science and ICT, a vice ministerial position. Many scientists criticize the appointment as the person who took responsibility for the Hwang Woo-suk scandal could head the governing body for science and technology. The Korean Union of Public Sector Research and Professional Workers, which represents state-funded research institutes, issued a statement titled “Obituary to Korea’s Science and Technology” and demanded the withdrawal of the appointment as it is an insult to the Korean social science community and means giving up science and technology system reform.

In a telephone interview, Park said that she had taken an excessive amount of responsibility for the past. “The policy direction was right, but Dr. Hwang deceived the government.” On having made no explanation or apology when she stepped down, she said, “I didn’t want my explanation to sound like an excuse. It was my apology to resign from the position.” About a year after the resignation, she was awarded an Order of Service Merit with Yellow Stripes.

She has learned from the past and can do better this time. However, there is a lingering concern. Is there any other figure in science and technology? Can someone who has been in academia for ten years return to the administration and show leadership when the feeble domestic science circle is criticized for lacking R&D results?

*The author is a deputy editor of industrial news at the JoongAng Ilbo.