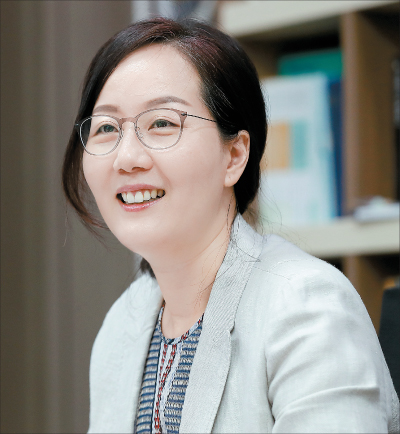 The ratio of homes to families is nearing 105 percent, yet there are more houses scheduled to come in the near future.

The number of homes planned in 2014 and scheduled to finish construction this year is estimated to reach 1.88 million. The Moon Jae-in administration has announced a new real estate regulation on Aug. 2, but people are still anxious.

Some worry that when the baby boomer generation retires, real estate prices will fall. Others think the number of quality homes still needs to be improved. Neither seems to know just what to do next.

To find some answers, JoongAng Ilbo recently interviewed lawmaker Kim Hyun-ah of the Liberty Korea Party (LKP), who is known to have keen expertise in real estate.

Q. How do you see the current real estate market?

A. As a matter of fact, I worried that the real estate market would become stagnant because the market started to stabilize last year. But nothing has changed. There are still too many homes and Korea is fast becoming an aging society. The market is still unstable, even after the new administration took power.

The supply of apartments is hitting a record high. In 2015 alone, the number of approved apartments hit 700,000. People will start moving in from the latter half of this year. I think the market will finally become steady from next year.

Why do you think the market has been so jittery?

Because the future is uncertain. The baby boomer generation has now become middle-aged. They are stressed out about their future. With low interest rates, they don’t see anything else but real estate to make their investments. Investing in real estate is the only successful investment technique they experienced in the past. That is why they want to buy houses or buildings.

Do you think there will be enough demand for the increasing number of houses?

That is the problem. The younger generation is not stable enough to buy apartments. The number of younger people is also dropping. People will marry, but they feel more hesitant about having children. I wonder if house prices will keep soaring if there are no potential residents. In the long-term, the heyday of the real estate market is already passed. It won’t fade as rapidly as Japan’s, but I believe the market will cool down sooner or later.

Some people believe the increasing number of homes will make up for the demand. What do you think?

Do you think the situation will be different in Gangnam District?

It is true that the number of quality homes in areas that are largely coveted by people are lacking. Their price jumps faster when the market is exploding and they fall more slowly during cool-down periods.

But I wonder if the environmental infrastructure in Gangnam is good enough to support the demand. There is not enough parks or cultural infrastructure. I don’t think their price will keep soaring.

Then why are there always countless numbers of people lining up to see model homes?

The fundamental problem lies in the presale market. Most of those people in line aren’t real potential buyers. As soon as they get the chance to buy the home, they sell it to other people for more money, sometimes with as much as a hundred million won [$87,925] added on to it.

Do you think there weren’t enough regulations to prevent such trade during the Lee Myung-bak and Park Geun-hye administrations?

After the Asian Financial Crisis, the real estate market needed to prosper in terms of boosting the domestic economy. At the time, the market was very much depressed and not a single trade was being made. I think the Moon Jae-in administration would have rolled out a similar strategy even if he went back nine years.

The problem is that the leaders missed when to transition from boosting to stabilizing. The government should have expected the market to overheat in 2015 and 2016. They missed their policy window.

The problem is that housing is overpriced compared to their real value. The prices are a comprehensive reflection of nearby transportation, parks, culture and employment opportunities. But the expensive homes in Seoul don’t provide all these opportunities. In New York or London, there are massive parks located in every nook and cranny of the city. People can enjoy those facilities regardless of their income. Korea’s cities should follow those models.

If the U.S. military base moves out of Yongsan and a park is established there, as scheduled, will it be of help?

Yes. But what should be kept in mind is that a park requires more money for operation than for establishment. Central Park in New York is being operated with funds collected from individuals and companies instead of the government. The park in Yongsan should be operated like that, as well. It would be burdensome to run it only on state funds.

Do you think the new real estate policy announced on Aug. 2 will effectively cool the market off?

If you take a look at the details, it’s the same policy announced 10 years ago. But now, there’s just no other way but to follow such steps. I think its effectiveness will come out in a week. I think there is a limit to how much the central government can control the real estate market.