BEIJING — A Chinese vessel crashed into a North Korean cargo ship loaded with coal last March at a port in Lianyungang in China's eastern Jiangsu Province, leading to a marathon debate over compensation that has yet to end, a Chinese government official exclusively told the JoongAng Ilbo Monday.

Nobody was injured, according to the source, who asked for anonymity. The North Korean sailors were staying in a hotel at the time of the accident. 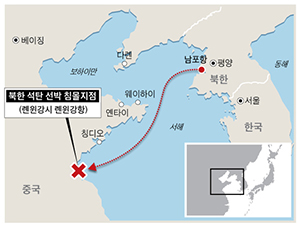 The ship was anchored at a port in Lianyungang after Chinese authorities rejected North Korea's port call, citing a UN Security Council resolution that banned Beijing from importing coal from the regime until the end of this year.

Beijing asked the North Korean ship to return to its country, but the sailors refused and decided to stay at the port instead.

The North Korean ship immediately sank after its hull was pierced by a vessel operated by a Chinese state-run company. The government official said the collision was an accident. It occurred around midnight and the Chinese captain couldn't see in the dark, the official explained. The North Korean ship is still underwater.

After the crash, the North Korean government dispatched an official from Pyongyang to negotiate compensation with Chinese authorities, but the two sides haven't reached agreement despite "multiple" rounds of discussions, said the Chinese government source.

The North is said to have asked for about 5.6 billion won ($4.9 million) in compensation for the ship and the load of coal, which China apparently rejected.

Lianyungang is a major Chinese port for North Korean coal imports. Last year, a combined 840,000 tons of coal were imported from around the world in over 181 transactions, most of which came from the North, government statistics show.

But the Chinese Commerce Ministry announced in February that all North Korean coal imports will be banned this year as part of UN Security Council sanctions punishing the regime for an intermediate-range ballistic missile test, carried out earlier this year.