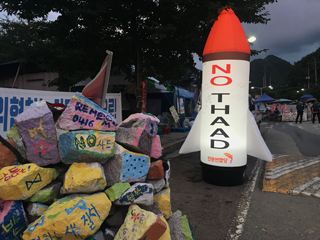 An inflatable missile is installed in a protest in front of Soseong-ri town hall in Seongju County, North Gyeongsang, near the Thaad deployment site. [KIM JUNG-SEOK]

While the deployment of the U.S.-operated Terminal High Altitude Area Defense (Thaad) is still being opposed by residents of Seongju County, North Gyeongsang, as well as left-leaning civic groups, the government’s compensation for the city of 46,000 is being processed as planned.

The Ministry of National Defense’s recent purchase of 33 tons of melons produced by Seongju farmers is one such example of compensation, which came amid farmers’ growing concern due to oversupply this year.

The military is also planning to purchase an additional 500 tons of melons, worth 1.1 billion won ($977,000), from Seongju farmers. While the military’s purchase of the Seongju melons is a pilot project, the government is planning to make it an official business starting next year.

Under the compensation package, the government promised to build a highway connecting Seongju and Daegu that would cost 800 billion won. Authorities are also contemplating the construction of a light railway connecting the two cities, which would cost 500 billion won, though it may be scrapped if studies show it is not economically feasible because of Seongju’s small population. The central government also promised to expand the number of state-run day care centers and kindergartens and invest 2.5 billion won in improving the city’s landscape.

Despite the government’s promises, many are still crying foul over the decision to set up the antiballistic missile system in the town, and are holding daily rallies in protest.

President Moon Jae-in’s order to bring in the four remaining launchers for Thaad in the wake of North Korea’s latest intercontinental missile launch on July 28 did not alleviate the tension. A Thaad battery typically has six launchers equipped with eight interceptor missiles, and two launchers are currently operational in Seongju. The Moon administration, upon launching in May, had delayed the deployment of the other four launchers until a proper environmental impact assessment could be conducted.

Thus, Moon’s latest order to resume deployment is a turnaround from the government’s initial plan to hold that impact assessment, which could have delayed initial deployment by up to 15 months.