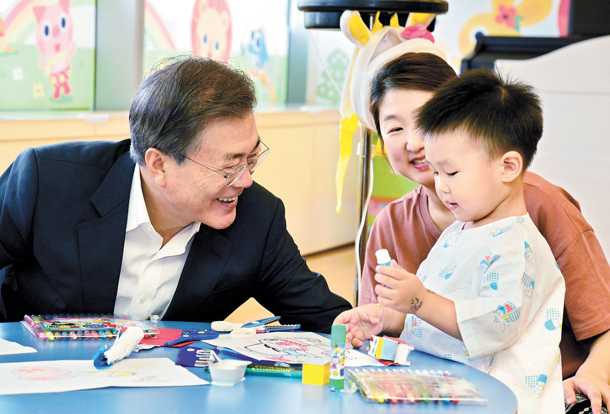 President Moon Jae-in on Wednesday unveiled an ambitious plan to significantly expand the coverage of national health insurance by investing more than 30 trillion won ($26.4 billion) over the next five years. Moon’s commitment to expanded universal coverage is part of his main campaign pledge to provide more welfare to society as president.

“Protecting the health and lives of its people is the most fundamental responsibility of a nation,” proclaimed Moon, adding that a nation that “can’t look after sick people” and “lets households fall into poverty because of medical costs” is not worthy “of being called a nation.”

The government plans to raise the percentage of medical treatments covered by national insurance to 70 percent from a current 63.2 percent, a rate that has remained unchanged despite government efforts to raise it over the past decade by pouring in over 20 trillion won.

“The burden of medical expenses is rising with 460,000 people in this country who spend more than 5 million won a year for medical treatment,” said Moon during a visit to Seoul St. Mary’s Hospital, where he announced his plan.

Widening the scope of national health insurance was a long-time promise by Moon. The 63.2 percent rate falls far short of the average coverage rate of 80 percent among members of the Organization for Economic Cooperation and Development.

Moon said his goal would cost 30.6 trillion won over the next five years. To pay for that, he said he would use about half of the national health insurance’s accumulated surplus of 21 trillion won, while the rest will be paid for by the central government.

Under Moon’s plan, a patient diagnosed with dementia will only have to pay 10 percent of the medical bills. Under the current system, those patients pay between 20 and 60 percent.

If implemented as planned, an inpatient with serious dementia who has spent 160 days in the hospital will have to pay 1.5 million won, down from 16 million under the current universal insurance.