President calls on military to toughen up

President calls on military to toughen up 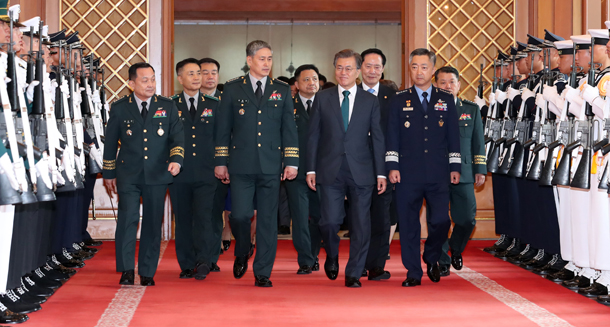 President Moon Jae-in, second from right, heads into a meeting with top military commanders following a ceremony to mark their recent promotion at the Blue House Wednesday. [YONHAP]

“We need a defense reform to turn over a new leaf, not just small improvements,” Moon said. “The urgent challenge is securing capabilities to counter the North’s nuclear and missile provocations. We need to quickly improve the military defense posture.”

He made the remark during a ceremony at the Blue House for six four-star generals who were appointed Tuesday. Moon’s request came amid the tensions on the peninsula following the trade of dire threats between Washington and Pyongyang. U.S. President Donald Trump warned the North of “fire and fury like the world has never seen,” while the North threatened to strike U.S.-controlled Guam.

At the meeting with the new generals, Moon stressed the importance of self-defense and asked them to eradicate corruption in procurement projects. Although he did not directly mention the menacing rhetorical exchange between Washington and Pyongyang, he asked the top commanders to bolster capabilities.

“The goal of defense reform is building a winning military,” he said, “a high morale military and a trusted military.”

He asked for the understanding of the Army and graduates of the Korea Military Academy, given that their dominance in military leadership was curtailed by the latest appointments. On Tuesday, Moon replaced seven out of the eight four-star generals, naming an Air Force general as chairman of the Joint Chiefs of Staff. Defense Minister Song Young-moo, meanwhile, is a former Navy admiral.

This is the first time that the two top posts are occupied by leaders outside the Army.

“The reason behind the latest reshuffle was to transform the military into a more advanced force with self-defense capabilities,” said an official of the Blue House.

Moon has promoted the need to bolster the country’s Air Force and Naval capabilities against growing asymmetrical threats from the North. In his phone call with Trump on Monday, Moon stressed the importance of imposing maximum pressure and sanctions. He mentioned the need for South Korea to own a nuclear-powered submarine and build more powerful ballistic missiles.

Last week, Moon visited the submarine command in the naval base of Jinhae, South Gyeongsang, to inspect the flagship submarine there, the An Jung Geun. He asked about a nuclear-powered submarine and an officer explained that it would allow a longer operation period and greater speed, providing strategic superiority over North Korean submarines.

“So, that’s the dream for the Navy,” Moon replied.

The Roh Moo-hyun administration, during which Moon served as a senior presidential aide, planned to build and deploy three nuclear submarines by 2020. It was secretly initiated in 2003, but later canceled after media reports. Defense Minister Song participated in the project while serving the Navy.