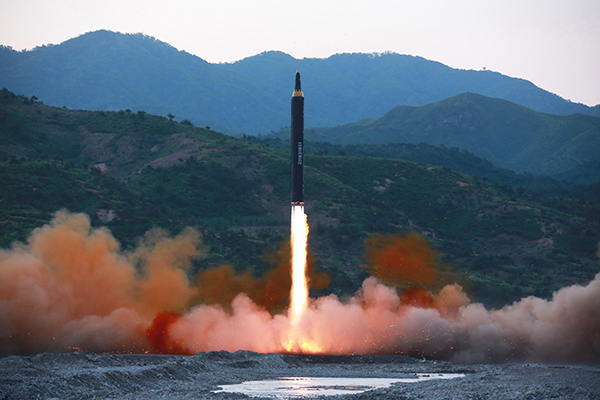 A Hwasong-12 ballistic missile as shown by North Korean state-media in May. [YONHAP]

U.S. President Donald Trump said Tuesday North Korea will be met with "fire and fury like the world has never seen" if it continues to threaten the United States, apparently in response to remarks made by North Korean Foreign Minister Ri Yong-ho, who said his country will "teach the U.S. a severe lesson with its nuclear strategic force."

"North Korea best not make any more threats to the United States," Trump told reporters at his New Jersey golf club during a vacation. "He has been very threatening beyond a normal statement. As I said, they will be met with fire, fury and frankly power--the likes of which this world has never seen before."

Trump's statement came after Ri told a regional security forum in Manila Monday that Pyongyang was prepared to use its nuclear force against Washington in retribution for the latest sanctions passed in the UN Security Council, which was led by the United States.

The council unanimously passed the sanctions last Saturday in New York following North Korea's two intercontinental ballistic missile tests last month, stepping up restrictions on its international trade, and affecting as much as a third of its $3 billion annual export revenues.

At a meeting in the 50th Association of Southeast Asian Nations (Asean) Regional Forum (ARF), Ri stressed that North Korea's nuclear and ballistic missiles were under no circumstances on the negotiating table, adding that the country will not "flinch even an inch" from further developing its nuclear arsenal unless the U.S. ditches its hostile policy toward the regime.

On Wednesday, North Korea took its menace a step further, threatening to fire a Hwasong-12 intermediate-range ballistic missile near Guam and the U.S. military bases there. The operation will enable "Yankees to be the first to experience the might of the strategic weapons of the DPRK closet," it said, using the acronyms of its official name, the Democratic People's Republic of Korea.

The statement was made by the Korean People's Army (KPA) Strategic Force, reported via the official Korean Central News Agency (KCNA).

"The KPA Strategic Force is now carefully examining the operational plan for making an enveloping fire at the areas around Guam with medium-to-long-range strategic ballistic rocket Hwasong-12," the KCNA statement read, "in order to contain the U.S. major military bases on Guam including the Anderson Air Force Base in which the U.S. strategic bombers…are stationed."

The North didn't give a specific timeline but said the operational plan was about to be thoroughly examined, after which it will be reported to the Supreme Command. It will be carried out in a "multi-concurrent and consecutive way" upon Kim Jong-un's order.

The North blamed Washington for ratcheting up tensions in the region with its flight of strategic bombers, referring to the U.S. Air Force's sending of two supersonic bombers from Guam to South Korea on a 10-hour mission last week in response to Pyongyang's second intercontinental ballistic missile test on July 28.

The situation, said the North, required its army to keep an eye out on Guam and take "practical actions of significance to neutralize it."
Kim was said to have recommended the operational plan to contain the "U.S. imperialists' aggression hardware."

"The U.S. should clearly face up to the fact that the ballistic rockets of the Strategic Force of the KPA are now on constant standby, facing the Pacific Ocean and pay deep attention to their azimuth angle for launch," said the KCNA.