Zhong Jinyong, the Korean national women’s table tennis team’s new coach, said on Wednesday that he hopes to watch the Korean players stand on the podium at the 2020 Tokyo Olympics. 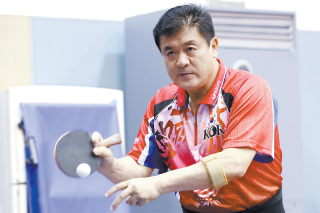 Though Zhong arrived in Korea last month, he was only able to start training with the team at the National Training Center in Seoul on Aug. 2, having spent the interim time watching the players compete in domestic tournaments.

“When we train, we’ve been focusing on the 2018 World Table Tennis Championship and the 2018 Asian Games in Jakarta,” Zhong said. “The Korean women’s table tennis has traditionally been strong and had its own sharpness. But now, they need to bring up their level one step further.”

“I want to watch the Korean players stand on the podium,” he added.

Zhong’s biggest goal as coach is to develop an ace player. Based on his analysis, Zhong believes that there is no difference in raw ability between Korean and Chinese players. He thinks that the Korean players need to sharpen their speed and power, considered the most important skills in table tennis.

“Korean women’s table tennis in the golden days had sharpness and was a threat to other teams,” Zhong was quoted by Yonhap news agency at the National Training Center in Seoul on Wednesday. “Now, in addition to that, we much play a type of table tennis that combines speed, power and spin.”

The addition of Zhong shows the desperate need for improvement in Korean women’s table tennis. At the Rio Olympics, the Korean women’s team was eliminated in the quarterfinals for the first time, a stage they didn’t even manage to reach at two of the most recent World Table Tennis Championships. The team has been criticized for their poor performance.

Though the women’s doubles team only won a gold medal at the 1988 Seoul Olympics, they managed to place in the medals table at every Olympics since the sport was introduced in 1988 until it was removed in 2004. In 2008 Korea won a bronze medal in the newly introduced team event.

For the upcoming Asian Games and the 2020 Tokyo Olympics, improvement the players’ skill level is the biggest task. The addition of Zhong, a veteran coach who trained the Chinese table tennis team for 20 years, was the very last resort for the Korean Table Tennis Association.

During Zhong’s time coaching the Chinese national team he managed some of the world’s top players including Ma Long, Xu Xin, Zhang Jike and Fang Bo. After an agreement was made with the Chinese Table Tennis Association, Zhong was able to join the Korean national team’s coaching staff on a contract that runs until the 2020 Tokyo Olympics.

He is the first Chinese coach to join the women’s team since 1998, and will lead the squad alongside head coach An Jae-hyung.

“I might not see Korean women’s table tennis beating China during my stay here,” Zhong was quoted as saying by Yonhap. “But I don’t think Korean table tennis will lose forever. Someday, it can beat China.”