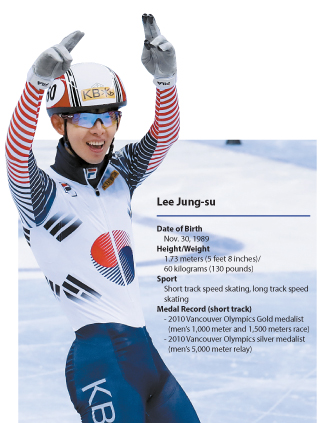 The source said Lee made the switch from short track to long oval for the second time in his career and that he’s currently training with the national speed skating team in Salt Lake City, Utah. In April, Lee came up short in the short track national team trials for the 2018 PyeongChang Winter Olympics.

Lee, 27, won two short track gold medals at the 2010 Vancouver Winter Olympics, but turned to speed skating before the 2014 Sochi Winter Games. After struggling in the new sport, Lee went back to short track, and enjoyed a career renaissance last year during the International Skating Union (ISU) World Cup season.

But after finishing eighth in the Olympic trials, where the top four earned Olympic berths, Lee decided to give speed skating another try.

Lee actually started out as a speed skater as a fourth grader but moved to short track in sixth grade.

The source said Lee is concentrating on mass start, a hybrid event in speed skating that, like short track races, allows some physical contact as skaters all start simultaneously. Race planning is at a premium as skaters have to jostle for position and make passes in corners, and this is where skaters with short track experience can enjoy an edge.

“Lee Jung-su is focusing on mass start because it requires strategizing like short track,” the source explained. “He feels mass start would also favor him because of his experience in long distance races [in short track].”

Lee’s switch is far from unique among Koreans. Because of the sheer depth of short track talent in the country, several young short trackers turn to speed skating, where the internal competition is less fierce, to give themselves a better chance of making the national team.

Former short trackers such as Lee Seung-hoon and Kim Bo-reum have in particular thrived in mass start, and they often train with short trackers to hone their cornering techniques. Lee and Kim were No. 1 overall in men’s and women’s mass start in the last ISU World Cup season.

Lee Jung-su will have to battle Lee Seung-hoon and a teen sensation Kim Min-seok for two Olympic berths in mass start. Lee is a virtual lock to earn one spot. Kim, 18, turned heads in February when he won the 1,500m and team pursuit gold medals and mass start bronze medal at the Sapporo Asian Winter Games.

The speed skating Olympic trials will be held in October.