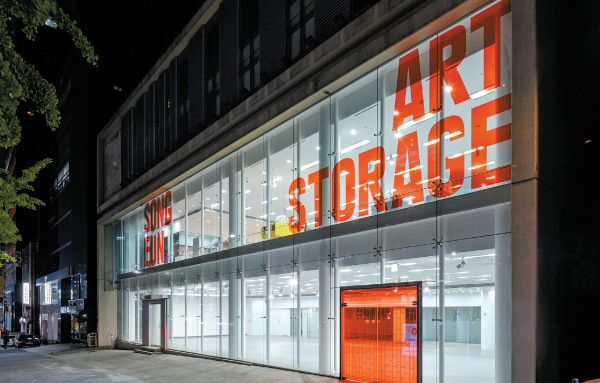 The building in Gangnam District, southern Seoul, where the exhibition “Not Your Ordinary Art Storage” will be held until May 2018. After the end of the exhibition, which features part of SongEun Art and Cultural Foundation’s collection, the building will be demolished and a new museum will be built in its place. [SONGEUN ART AND CULTURAL FOUNDATION]

Giving art lovers in Seoul more options, new large-scale contemporary art museums are shaping up to be the next hot spots of Gangnam and Yongsan.

The K Museum of Contemporary Art opened in December near Apgujeong Rodeo station in southern Seoul. The Amore Pacific Museum of Art, now in Yongin, Gyeonggi, will relocate to the cosmetics giant’s new headquarters near Sinyongsan subway station in central Seoul later this year. The building is designed by British architect David Chipperfield.

Also, the SongEun Art and Cultural Foundation, which was set up by Samtan Co., will open a new museum in 2020 at the energy company’s new headquarters to be designed by Swiss architect team Herzog & de Meuron and built in the very heart of the Gangnam district in southern Seoul. The site is a 10-minute walk from the foundation’s existing gallery SongEun Art Space.

From top: A group of sculptures by Chun Sung-myung, an ink painting by Donghyun Son, and an installation work by Juree Kim are part of the exhibition. [SONGEUN ART AND CULTURAL FOUNDATION]

The second and third floors of a building that stands in the space, which will eventually become the company’s new headquarters, host a free exhibition that the foundation launched in June to promote its activities and its new museum. The show titled “Not Your Ordinary Art Storage” runs through May 26, 2018, right before the building is demolished to begin construction of the new building.

The exhibition on the second floor starts with installation works by Suki Seokyeong Kang, a finalist of the 2013 SongEun Art Award. Then, visitors are led to the sculptures of collapsing houses by Juree Kim, winner of the 2010 Award, and grotesque sculptures by Chun Sung-myung, which may remind viewers of a scene from a dark fairy tale.

There are also ink paintings by Donghyun Son, winner of the 2015 Award, which portray hybrid superheroes in traditional East Asian style and highlights the principles and techniques of the East Asian ink paintings.

When visitors make it to the third floor, they may feel like they have stepped into a scene from Alice in Wonderland, because the space looks like a typical old-fashioned Korean business office with several doors that lead to smaller office rooms, but when visitors open each door, they will encounter a mysterious artwork.

“The exhibition features 52 works by 34 local artists, most of whom are the winners or finalists of the annual SongEun Art Award since 2001,” said Choi Jin-yi, project coordinator at SongEun Art Space. “The exhibits are just a small part of SongEun’s collection. The exact scale of the collection will be unveiled when the new museum opens.”

The exhibition is open from 2 p.m. to 7 p.m. on Thursday to Saturday. Visit on Monday to Wednesday during the same hours are also allowed but requires booking at least one day before. It is closed on Sunday. For details, visit www.songeunartspace.org.