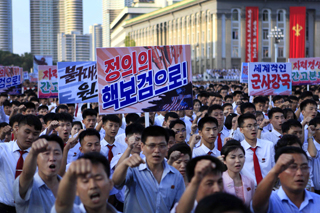 Tens of thousands of North Koreans gather for a rally at Kim Il Sung Square carrying placards and propaganda slogans as a show of support for their rejection of the United Nations’ latest round of sanctions on Wednesday in Pyongyang, North Korea. [AP/YONHAP]

The debate on North Korea’s denuclearization is between talks and sanctions. Some say sanctions are ineffective and believe we should pursue talks. First, they argue sanctions against the North have never been effective, as we’ve seen in the UN Security Council’s sanctions. Second, they assert that China needs North Korea strategically and wants to use North Korea to overwhelm the United States in Asia. Therefore, China would not support sanctions that go against its own interests.

Such claims, though, are flawed. The first reason applies to UN Security Council Resolution 2270, which allows the export of minerals for the sake of people’s livelihood. But after the fifth nuclear test, Resolution 2321 raised the stakes to anthracite exports. Since March, China has officially not been importing anthracite from North Korea, and as a result, North Korea’s exports to China fell by more than 25 percent in the first half of the year. While imports from China have increased, it is not a bad thing as it consumes North Korea’s foreign currency.

The second reason does not take into account the complexity of national interests. North Korea’s presence is a security interest to China, but it comes at an economic cost. If the United States imposes sanctions on China, the economic cost would outweigh any security gains. This is the reason for China’s support of Resolution 2371 on Aug. 6, which banned imports of North Korean minerals and fish products.

Of course, sanctions may not be enough to prevent nuclear and missile tests. North Korea is not likely to give up before securing second-strike capability. However, the chances of talks preventing tests are even lower. It is like mistaking Kim to be a saint to believe he can be persuaded to give up the country’s nuclear program through talks.

Strong economic sanctions can also reduce the price to pay in negotiations for denuclearization. Once North Korea has second-strike capability against the United States, the price of denuclearization will surge. North Korea might demand a peace agreement and withdrawal of the American military from South Korea in return for abandoning its missile program.

If the United States and North Korea agree on these terms, South Korea would be exposed to North Korea’s nuclear weapons without the presence of American forces. To prevent such a scenario, sanctions should succeed to undermine North Korea’s bargaining power.

If South Korea wants to be in the driver’s seat on peninsular affairs, we need to pay the cost. Recently, the U.S. Congress overwhelmingly passed a sanctions bill that includes bans on trade with North Korea, employment of North Korean workers and supplying oil to North Korea. If the law is to be effective, companies and individuals doing business with North Korea need to be identified. But since Iran and Russia are also under the sanctions, the United States has to divide its attention among three countries. Therefore, we need to concentrate on collecting information on North Korea-related transactions and share it with the United States to improve the efficacy of the law.

There is no manual for dealing with North Korea. It is up to the caliber of the administration. Seoul is preparing marathoners to run long-distance, but we don’t have sprinters for short races. It is doubtful whether the government has the capacity to control the entire process. If the void is not filled soon, chaos over national security and North Korea policy may grow, and internal discord and South Korea-U.S. discord may follow.