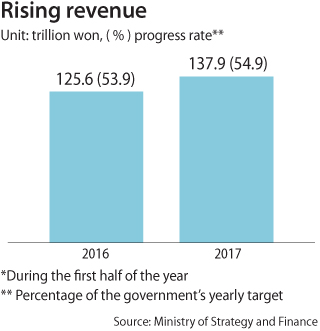 The government’s tax collection during the first half of the year exceeded expectations, further giving President Moon Jae-in fuel in his push for various welfare and job creation policies, including executing a supplementary budget.

According to the Ministry of Strategy and Finance Thursday, it collected 137.9 trillion won ($120.9 billion) in taxes between January and June, up 12.3 trillion won from the same period last year.

The government projected an 8.8 trillion won increase for the year when it proposed a supplementary budget in June, and the latest data shows it has already exceeded that target.

“Tax revenue went up because companies performed better last year and the number of self-employed people who filed their taxes also increased compared to the past,” said Ko Jong-ahn, a director at the Finance Ministry.

The tax collected during the first six months of the year accounted for 54.9 percent of the government’s 2017 revenue target of 242.3 trillion won. It represents an improvement of 1 percentage point from the progress made at this time last year. The progress rate for corporate tax, value-added tax and income tax all surpassed the 50 percent level.

The better-than-expected tax collection gives Moon much needed capital to fulfill the 11.2 trillion won supplementary budget that was passed by the National Assembly in July. He announced on Wednesday that he will expand the coverage of state health insurance without raising taxes. The main opposition parties criticized the plan saying it will eventually lead to more tax collection in the future.

“There are some signs of economic recovery, as reflected by improved exports, but there are still various uncertainties coming from the country and abroad such as high household debts and trade issues,” said Ko. “This is the time when the government should implement active fiscal policies. The government will improve the people’s lives and create more jobs through various measures such as executing the supplementary budget as early as possible.”

The Finance Ministry added that it will spend the budget more efficiently through restructuring its spending and also focus on finding more ways to collect taxes more stably from now on.