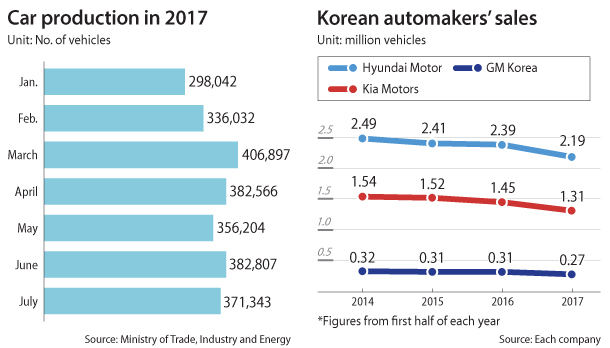 The Korean auto industry is taking hits from all sides. Overseas sales have been sluggish, pulled down by tepid demand for SUVs and trade tensions with China. Relations between labor and management are going steadily downhill as wage disputes have become increasingly acrimonious. The union at Korea’s biggest automaker, Hyundai Motor, has already declared a partial strike Thursday, and unionists at other major car companies are expected to follow suit.

But perhaps no predicament is bigger than the one besetting Korea’s second-largest automaker, Kia Motors. A class action lawsuit currently playing out in court could put the company in the red.

Then three years later, 12 employees filed a class action suit for the company’s workforce in Korea, demanding the automaker issue back pay worth 37 million won to each worker for unpaid wages between October 2011 and October 2014. This would cost Kia about 1.1 trillion won.

On top of all that, the company would have to set aside about 1 trillion won for the matching severance pay that’s given to workers after they retire. Combined, the litigation would cost Kia about 3 trillion won. Given its operating profit from the first half this year stood at 786.8 billion won, the loss would immediately be felt.

The ruling could have a domino effect on similar cases pending in local courts involving other automakers. Under the worst circumstances, the amount of compensation by auto companies nationwide could balloon to nearly 10 trillion won, according to some estimates.

The verdict in both Kia lawsuits is scheduled to come on Aug. 17.

In response to the ongoing situation, the Korea Automobile Manufacturers Association, which represents all the carmakers operating in Korea, said Thursday that such losses would leave automakers with no choice but to relocate its manufacturing overseas

“With additional employment costs as high as 3 trillion won, Kia would face an unexpected management crisis,” the association said in a statement. “This would deal a heavy blow to the competitiveness of the company, which is falling behind due to already high labor costs.”

Kia’s loss could have a dire impact on local auto parts suppliers as well. The Korea Auto Industries Coop. Association, which represents parts and components makers, held an emergency board of directors meeting on Wednesday. “In case of the loss … a serious liquidity crunch [at Kia Motors] is inevitable,” the association said in a statement after the meeting. “It could ultimately threaten the very livelihood of parts suppliers reliant on Kia Motors.” This would include some 3,000 companies nationwide.

The decision set to be made next week could not have come at a worse time for the local auto industry, which is struggling in terms of performance domestically and internationally.

The performance of Hyundai and Kia in China has been less than impressive this year, affected by a consumer boycott against Korean products as a result of a political row between Beijing and Seoul over deployment of an American antimissile system on Korean soil that China believes threatens its security interests. The two automakers’ combined sales from China during the first half tumbled by 46.7 percent.

Domestically, Korean auto production in July stood at 371,343 cars, according to data released Thursday by the Ministry of Trade, Industry and Energy. Although it was an increase of 3 percent from last year, the positive results are moot because Hyundai’s labor union was on strike last July. Total production during the first half of the year fell 1 percent from 2016.

“How strikes unfold during the remainder of this year is going to again be a decisive factor for the performance of the car industry,” said Kim Jung-ho, a deputy director in the automobile and aerospace division at the Trade Ministry. And so far, things aren’t looking good for the automakers.

Aside from the unions of Hyundai and GM Korea, which already conducted partial walkouts last month over wage disputes, Kia’s union has also voted to strike, though they have yet to announce when.