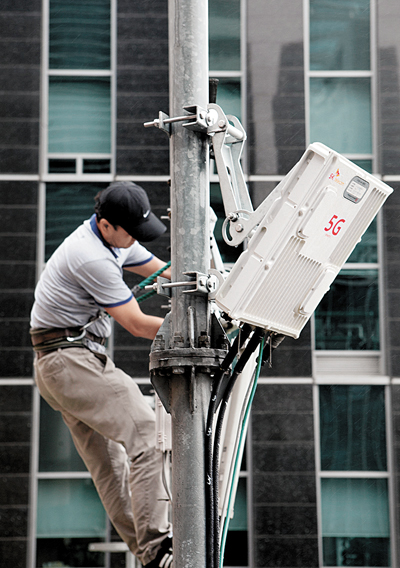 Mobile carriers are teaming up with local partners to strengthen competitiveness in the battle over a next-generation 5G network and to localize equipment used in the development.

The relay station amplifies a wireless 5G signal between base stations and handsets so the signal can reach areas with poor coverage.

While Korea has been building up a 5G network based on the 28 gigahertz frequency band, which is a high-frequency band that allows data to be transferred faster. A major concern for mobile carriers has been that radio waves at this frequency have a shorter range than lower bands.

“When a 5G network is established nationwide, the relay device can play a core role in expanding network coverage,” a spokesperson from SK Telecom said.

The telecom company noted that it hopes to expand partnerships with local small and midsize enterprises (SMEs) like KMW to accelerate localization of network equipment related to a high-speed 5G network. Until now, the SK Telecom’s partnership has mostly been with global giants like Nokia and Ericsson.

To attract local SMEs to the 5G development scene, SK Telecom has been offering smaller suppliers the opportunity to test their services at a lab space dedicated to 5G development established its Bundang office in Gyeonggi in 2014. The carrier is currently cooperating with other SMEs for projects other than developing the relay station, it said.

On the same day LG U+, a smaller mobile carrier, announced it has developed a 5G network simulator in hand with a local research team from Hanyang University.

The so-called 5G mmWave Simulator is able to come up with simulated information such as data transmission speeds and radio signal strength at specific locations under a 5G network when users input relevant data including frequency band used, location of base stations and height of nearby buildings.

The simulator is expected to be a useful tool when establishing a 5G network nationwide, as engineers can find out what obstacles or situations to consider prior to setting up a network, according to the mobile carrier.

“As the 28GHz frequency can easily be influenced by nearby obstacles like buildings as the radio wave bounces off buildings or is absorbed by them, we decided to develop a 5G simulator in hand with Hanyang University to make the network design process more efficient,” LG said in a statement. “We hope to foster future engineers from local universities through such partnerships with academia.”