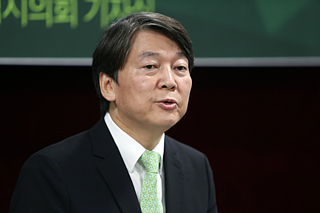 People Party’s Ahn Cheol-soo at a press conference on Thursday in Gwangju. [YONHAP]

Former presidential nominee Ahn Cheol-soo of the People’s Party registered his candidacy for party chairmanship on Thursday, officially kicking off another campaign amid criticism from contenders and party members that he should stay away from politics.

Ahn, who ran in the May 9 election and was defeated with a margin of almost 20 percent by President Moon Jae-in, has entered the intraparty race just three months after his electoral defeat.

The software mogul-turned-politician argued that only he can save the embattled party, which is still reeling from a campaign scandal that has dragged its approval rating to 5.4 percent, the lowest among the five political parties.

“I will do my best to revive the party by campaigning on my vision and reform plans for the part,” said the former presidential runner after candidacy registration, adding, “This party convention should be all about reform.”

The party of 40 lawmakers will elect its new leader at the party convention on Aug. 27. Ahn is competing with Chung Dong-young and Chun Jung-bae, both of whom have strongly criticized the rival’s decision to join the race, saying it was too early for him to return to politics since he is, as the party’s presidential nominee, at least partly responsible for the recent fake audio tape scandal.

“He is someone akin to an arsonist who put the party on fire, and now he wants to put out the fire,” said Chun.

A number of party members tried to dissuade Ahn from joining the race in the lead up to his candidacy registration Thursday, but to no avail.

“Even if he is elected party leader,” Rep. Lee Sang-don of the People’s Party said in a radio interview with MBC Thursday, “he will not be able to take command of the party. Party lawmakers will defect en masse.”

While Ahn faces stiff opposition from within his party, he is generally seen as having the highest chance of clinching the party leadership. If elected, he will face the daunting task of steering a party with low approval and 40 lawmakers, many of whom doubt whether Ahn has what it takes, given his less than expected performance over the past five years since becoming a politician in 2012.