North renews its threat to Guam

North renews its threat to Guam 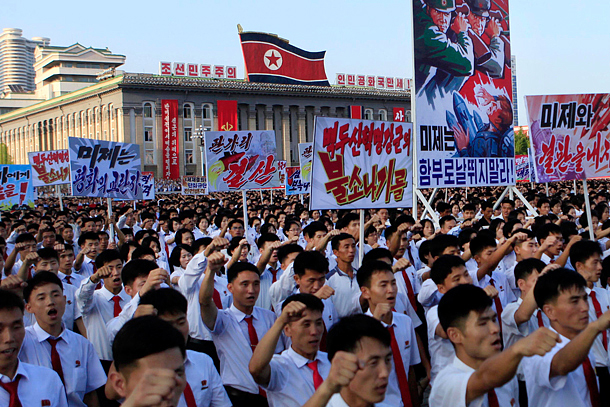 North Koreans shout slogans at a rally at Kim Il Sung Square in Pyongyang carrying placards that claim the country is a nuclear power and to strike the United States on Wednesday. [AP/YONHAP]

North Korea said Thursday an operational plan targeting waters near Guam will be completed by mid-August and reported to leader Kim Jong-un for his final order, threatening to send four Hwasong-12 intermediate-range ballistic missiles over Japan to land 30 to 40 kilometers (19 to 25 miles) away from the American island in the Western Pacific.

The North didn’t mention when the operation would be carried out, but said it would “keep closely watching the speech and behavior of the U.S.” for cues. The statement was made in English by Kim Rak-gyom, commander of the Korean People’s Army (KPA) Strategic Force, and released via the official Korean Central News Agency (KCNA).

The more specific threat to Guam and its U.S. naval base came after U.S. President Donald Trump said Tuesday in New Jersey that North Korea will face “fire and fury like the world has never seen” if it continues to threaten the United States. The North relayed its Guam threat for the first time Wednesday through KCNA without any timeline.

The KPA is “seriously examining the plan for an enveloping strike at Guam through simultaneous fire of four Hwasong-12 intermediate-range ballistic rockets,” the KCNA report read Thursday, adding that the operation was meant to send a “crucial warning” to the U.S. about its sanctions on the regime.

Trump “let out a load of nonsense about ‘fire and fury,’ failing to grasp the ongoing grave situation,” the North said, adding that Trump’s comments were “extremely getting on the nerves of the infuriated Hwasong artillerymen of the KPA.”

“It seems that he has not yet understood the statement. Sound dialogue is not possible with such a guy bereft of reason and only absolute force can work on him.”

The North said four Hwasong-12 missiles will “cross the sky above Shimane, Hiroshima and Kochi prefectures of Japan,” flying 3,356.7 kilometers for 1,065 seconds, or about 17 minutes, before splashing in waters off Guam.

The tit-for-tat began Monday when North Korean Foreign Minister Ri Yong-ho told a regional security forum in Manila that Pyongyang was prepared to “teach the U.S. a severe lesson with its nuclear strategic force” in retribution for sanctions passed by the UN Security Council, which were led by the United States.

Ri said during a meeting at the 50th Association of Southeast Asian Nations (Asean) Regional Forum (ARF) Monday that North Korea’s nuclear and ballistic missiles were under no circumstances on the negotiating table, adding that the country wouldn’t back down unless the United States ditches its hostile policy toward the regime.

Trump fired back Tuesday while talking to reporters at his New Jersey golf course during a vacation, saying in reference to Kim Jong-un, “He has been very threatening beyond a normal statement. As I said, they will be met with fire, fury and frankly power, the likes of which this world has never seen before.”

On Wednesday, while relaying its Guam plan for the first time, North Korea blamed Washington for ratcheting up tensions in the region with its flight of strategic bombers, referring to the U.S. Air Force’s sending of two supersonic bombers from Guam to South Korea on a 10-hour mission last week in response to Pyongyang’s second ICBM test on July 28.

“The U.S. should clearly face up to the fact that the ballistic rockets are now on constant standby,” the KCNA said.

Hours later, Trump tweeted: “My first order as president was to renovate and modernize our nuclear arsenal. It is now far stronger and more powerful than ever before. Hopefully we will never have to use this power, but there will never be time that we are not the most powerful nation in the world!”

U.S. Defense Secretary Jim Mattis said Wednesday in Washington that Pyongyang should cease any consideration of actions that would lead to the “end of its regime and the destruction of its people.”

The combined allied militaries now possess the “most precise, rehearsed and robust defensive and offensive capabilities on Earth,” Mattis said in a statement issued by the Defense Department. “North Korea will continue to be grossly overmatched by the U.S. and its allies,” he added, “and would lose any arms race or conflict it initiates.”

Citing two senior military officials and two senior retired officers, NBC News reported Wednesday that the Pentagon has prepared its own “specific plan” for a preemptive strike on North Korea’s missile sites should Trump order such an attack.

According to the sources, a key part of the plan would be a B-1B heavy bomber attack originating from Andersen Air Force Base in Guam.

In an actual mission, the non-nuclear bombers would be supported by satellites and drones and surrounded by fighter jets as well as aerial refueling and electronic warfare planes, the officials said, adding that the targets would be approximately two dozen North Korean missile launch sites, testing grounds and support facilities.

Distancing himself from Trump and Mattis’ bellicose statements, Secretary of State Rex Tillerson told reporters as he traveled back from Southeast Asia that Trump had meant to send a strong message to North Korea in a language that Kim Jong-un would understand, adding he didn’t think the situation had dramatically changed over the last 24 hours.

“I think Americans should sleep well at night, have no concerns about this particular rhetoric of the last few days,” Tillerson said Wednesday. “I think, in fact, the pressure is starting to show. I think that’s why the rhetoric out of Pyongyang is beginning to become louder and more threatening.”

Presidential spokesman Park Soo-hyun said in a statement that the council agreed to consider “every necessary option” to maintain peace on the peninsula, a goal that would be based on the “ironclad” alliance between Seoul and Washington. Park said Seoul’s “door for dialogue” with Pyongyang was still open.