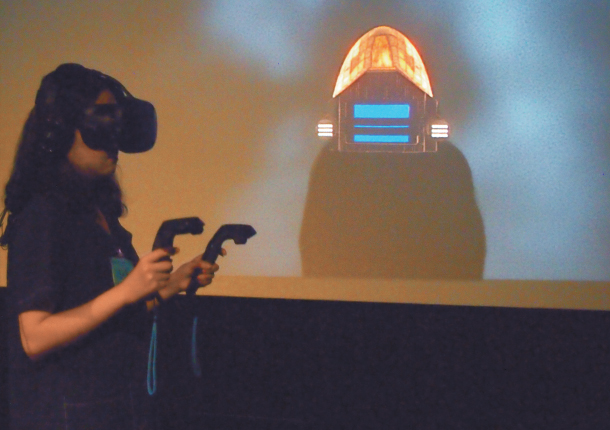 A visitor tries the VR exhibit at the Museum of Modern and Contemporary Art Seoul, “The History of Visual Magic in Technology Pt.1: Canadian VR Films,” on Thursday. [YOON SO-YEON]

Art is a reflection of the society it’s created in, not only because it depicts the values and ideas of the contemporary world, but also because it experiments with the technologies of that particular era. 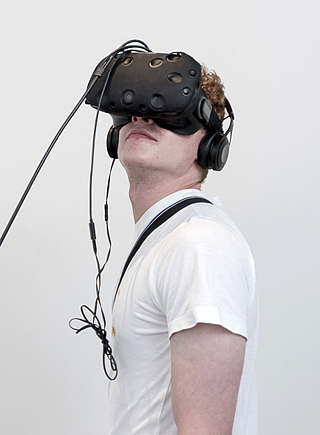 Technology has progressed so rapidly in recent years that once-unimaginable advancements like virtual reality (VR) and augmented reality (AR) technology have become common in people’s everyday lives - just look at the VR cafes in the streets and the massive popularity of AR games like Pokemon Go.

Taking a step further to give meaning and value to the new digital space, artists have begun to produce their own virtual worlds that give the viewers a multi-dimensional experience into their creative landscapes. At four exhibits currently ongoing in Seoul, visitors have the opportunity to view art in ways they never have before. Whether using VR technology to learn about relics of the past or challenging what is perceived as art using AR, these exhibits offer much more than just a simple two-dimensional experience. 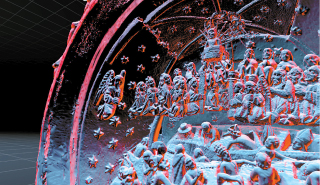 It’s been 24 years since the first prototype of the VR headset commonly seen these days was released by Forte Technologies in 1994, the Forte VFX1, and just over a year since it became a popular means of gaming, such with as the PlayStation VR released in October 2016.

VR is becoming more familiar to the general public thanks to things like VR rooms and its novelty still intrigues people thanks to the 360-degrees views of a real-life landscape people can not only walk around, but also interact with.

The Museum of Modern Contemporary Art Seoul (MMCA) is currently holding a VR exhibition, with the works of three digital media artists displayed in “The History of Visual Magic in Technology Pt.1: Canadian VR Films,” which goes until Aug. 15. Inside the museum’s multi-project hall, visitors can not only see, but actually try for themselves the three different interactive three-dimensional virtual worlds created by the Canada Film Center Media Lab. 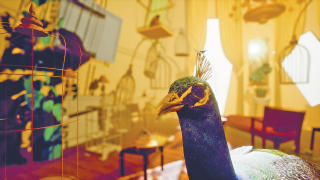 The exhibition aims to “reproduce reality and the image of dreams as realistically as possible,” and to “explore the historical and aesthetic transformations in cinematography that come along with the development of these technologies,” according to the museum.

“Small Wonders” is an up-close look at two Gothic prayer beads made in the 16th century, with the actual micro-CT images of a small bead magnified and organized into layers for the viewers to scrutinize. 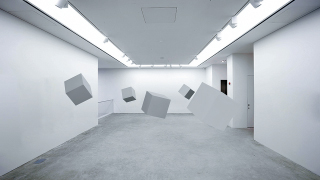 What originally was the size of a child’s fist is recreated into a massive sculpture before your eyes, and the small relic opens its secrets up to people who can look at the hidden structures of the relic that would not have been visible to the naked eye. “VR is a medium that plays with scale,” said Anna Serrano, the producer of the three works. “You have something so small, and you can put it up into something this big. This is only possible through VR.”

The other two works take on a different tone. “Small Wonders” touches on how a Cambodian child’s life looks different according to different perspectives the viewer can choose to look through, while “Body/Mind/Change” is an experiment of how the human mind reacts to fear caused by an unfamiliar fusion of the human body and man-made technology. Whereas “Small Wonders” is a here-and-now look into a person’s life, “Body/Mind/Change” is an extension of the human struggle against its own technological creations.

Another exhibition at the MMCA Seoul, “The Principle of Uncertainty,” offers a different kind of VR experience to the viewers. The exhibit, which will go on until Oct. 9, is not an exclusively VR one, but rather an assembly of experimental art using different mediums. Among the works of four modern artists - Walid Raad, Ho Tzu Nyen, Kwon Ha-youn and Zachary Formwalt - are not only the VR exhibit created by Kwon, but also videos, photos and quirky paintings by Raad, in separate, yet connected spaces.

In contrast to the VR works in the Canadian exhibit, Kwon’s VR questions the idea of human memory, creating a world that is part reality and part dream. Kwon’s work, “Bird Lady,” is a dreamy and beautiful recreation of an anecdote she heard as a student back in Paris, with the appearance of the house and the movement of the birds changing not to the flow of time, but according to the position and the movement of the viewer.

Raad’s latest work, “Preface to the ninth edition: On Marwan Kassab-Bachi,” is a collection of paintings drawn on an ordinary canvas, but on the back side of the canvas frame. By providing the museum with his own explanation of the work, which is mixed with both true and false information, the artist explores the boundary between what’s normal and abnormal, and what’s true and false.

While VR requires a special headset and can only be enjoyed by a certain number of people at a time, AR technology can be enjoyed by anyone with a smartphone.

At the Artside Gallery in central Seoul is Lee Bei-kyoung’s “Space & Time, Thought,” which is open until Aug. 20. Lee’s famous installation and video works come together inside people’s smartphones, as the exhibition incorporates AR, three-dimensional animation and sound into the gallery.

When the visitor makes their visit to the first floor lobby of the gallery, Lee displays a 3-D animation about the ideas of space and gravity which runs 24 hours a day for everyone who passes by the gallery to see. Inside the gallery, one encounters the “Zero Gravity Space,” the AR work.

Inside the exhibit with walls painted white, visitors are invited to first view the room in its raw state, and then examine how it changes with their smartphones. Through the eyes of their phones, people can see cubic figures floating around inside the zero gravity room.

The cubes float, sometimes into the walls and into each other, and move around on their own, not bound by the laws of gravity. “I used cubes because they are the purest and the most neutral form,” said Lee.

With actors utilizing the whole space as their playground, the changing digital landscape will provide the visitors with an experience they’ve not seen before.

To go to MMCA Seoul, get off at Anguk station, line No. 3, exit 1, and walk 10 minutes towards the Gyeongbok Palace. Admission costs 4,000 won ($3.49), and a ticket allows visitors to view all the exhibits within the gallery. Children under the age of 13 cannot try the VR gear at the “The History of Visual Magic in Technology Pt.1: Canadian VR Films.” For more information, visit www.mmca.go.kr, or call (02) 3701-9500.