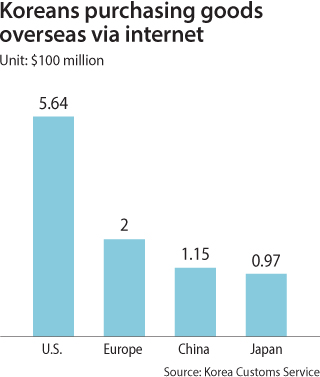 Online purchases from overseas continue to grow among Koreans and they’re looking beyond American vendors.

According to the Korea Customs Service on Friday, Koreans bought $974 million worth of goods directly from overseas via the internet in the first half of this year. That’s a 30 percent increase compared to the previous year. In terms of the number of items bought, the figure reached nearly 11 million, which was a 34 percent increase year-on-year.

The custom agency said buying good online from overseas offered significant savings. It also noted that Korean consumers are diversifying the places in which they shop.

“One of the key attractions in a more diversified market is that consumers can purchase items that can hardly be found locally,” said a custom official.

In the past, Koreans mostly bought from American vendors online. Now they are branching out to vendors in Europe, China and Japan.

In fact, while goods purchased from the U.S. increased 13 percent by value compared to a year ago to $564 million, and by the number of items increased 15 percent to 6.31 million goods, other markets have seen sharper expansions.

Europe’s market share has been steadily growing after first reaching double-digits in 2015. It was 16 percent this year. China’s market share rose from last year’s 11 percent to 15 percent.

The custom agency said another noticeable change this year is a significant increase in the purchase of electronics goods including TVs and smartphones. The number of electronics items that were purchased overseas via the internet surged 115 percent year-on-year.

The purchase of air purifiers from China grew the most of any item. In the first half of 2016, only 7,141 air purifiers were bought online from China. That figure jumped to 78,750 between January and June this year, an 11-fold increase.